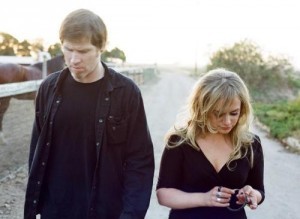 The doors of the Shepherds Bush Empire on a dark and drizzly Tuesday night opened, back of the wardrobe style, on to a dusty, sun-drenched, mildly hungover Saturday afternoon in the Midwest in the company of Isobel Campbell and ex-Screaming Trees' Mark Lanegan.

Mark’s dark brooding, gravelly toned vocals were perfectly counterpointed by Isobel’s breathlessly sweet demeanour. The combination of a lazy beat and lyrics like Undone (which surely needs no further explanation) and Circus is Leaving Town conspired to lend their relationship an almost sleazy, Minogue/Cavesque edge. A tense intimacy was evident between the two performers –  so intimate in fact, that the audience were at first slickly, then awkwardly left totally unacknowledged throughout the whole performance. Transitions between tracks were a constant flurry of sheet music and maracas, bowed heads and avoided eye contact, which at times left the duo in danger of being upstaged by an ice machine and the audience’s seasonal cough (from which Isobel is endearingly not immune).

For two such accomplished musicians, neither Lanegan nor Campbell seemed entirely comfortable in the limelight. Literally, in Mark’s case, since due to either lighting mishap or wardrobe malfunction, he was left in the dark throughout. Campbell, on the other hand, was a vision in cowboy-check, poured into denim that gave her a Giacometti-like profile.

Being unable to see or interact with them does nothing to undermine a pitch perfect performance, notably with Campbell whistling in lieu of violin on tracks such as Saturday's Gone. Any nerves on her part should surely have been set at ease the moment she picked up the cello, and the audience was lit up by a hundred cameraphones, instantly conveying their appreciation at the nod to her roots with Belle and Sebastian.

In all it was a beautiful evening of fine musicians doing what they do best. Mark and Isobel - we loved having you. But did you even know we were there?

This show was part of the NME Awards season which continues until the end of this month.