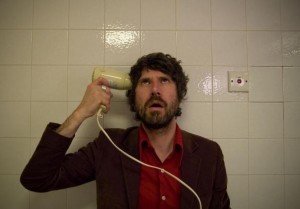 While the rest of the Super Furry Animals take a breather, Londoners can rejoice as psychedelic genius and prolific frontman, Gruff Rhys, returns to play the classy Cadogan Hall in Sloane Square later this month.

After a busy 2010 that saw him release a film, 'Seperado!', which documented his trip to Patagonia to discover his long lost relatives, and an album with unknown Brazilian musical maverick Tony Da Gatorra, Gruff is now preparing to release his third solo album 'Hotel Shampoo' on Valentines Day.  The album’s name is inspired by his extensive collection of miniature cosmetics, hoarded over fifteen years of touring with the Super Furrys, which he assembled in a Cardiff hotel last year as part of an art installation.

Recent single 'Shark Ridden Waters' and the forthcoming slab of mariachi-tinged magnificence of 'Sensations In The Dark' have got us glistening with anticipation for more. He's been one of the most consistently brilliant performers of recent years and fans are unlikely to leave disappointed.  Make sure you turn up early to catch Welsh surf rockers Y Niwl in support.