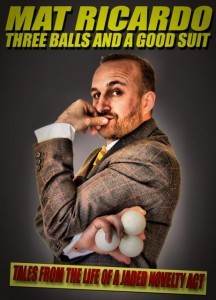 Ahead of his one-man show next month at the Etcetera Theatre, we spoke to juggler extraordinaire and North Londoner Mat Ricardo.

Introduce yourself in one sentence. What would someone not guess about you from having met you?
Hello! My name is Mat Ricardo, and for the last 25 years I have toured the world as a comedy variety performer.

How did you become a juggler? What was it like busking in London?
I started juggling as a hobby while at college because I was a shy and socially inept loner. By the time I'd finished my course I'd decided that I wanted to devote my life to it. This involved performing, so the shy part of me slowly vanished and was replaced by a dry, snarky comedian, which is mainly what I do now.

As for street performing, it can be heartbreakingly hard work, both physically and emotionally. Buskers are often looked at by some as little more than glorified beggars, and that hurts, but it can also be amazingly joyful: people come from all over the world to places like Covent Garden to see the shows, and there's no better feeling than creating a unique theatrical event from what was just an empty piazza. What the show also always is, though, is honest - no advertising, no con - if you liked the show, give the performer some money. That's a pretty amazing business model.

What are your fondest memories of growing up in London?
God, so many..being taken up to Hamleys before christmas as a child - it seemed so impossibly big. Going to the big west end cinemas to see things like Star Wars. But mainly, I think, just the people. My parents would both work, so sometimes my grandparents would look after me, and when we'd walk around Edmonton, everyone would know them - our walk would be punctuated with a cast of gossiping characters that would nowdays seem way too cliche - windowcleaners, fruit stallholders, florists, streetsweepers..everyone would stop for a chat. Whenever I watch brilliant 70's London TV shows like Minder, I point at the TV and say "That is exactly what my childhood looked like". Oh, and the Golden Egg cafes. I can still vividly remember my first egg and chips. I'm never happier than when I'm sitting in a good London greasy spoon.

What's your take on the state of London cabaret? Is there now too much emphasis on burlesque and drag acts?
Hmm. Not sure. There are a lot of burlesque clubs, but over the last few years a small circuit of variety nights has started to appear, which is great. Obviously I'd like there to be some large scale well-funded variety shows in big well known venues the same way there are with stand up comedy (Richard Herring's monthly shows at the Lyric, for example). If I had a problem with burlesque it would be the way it seems to have stylistically taken over some non-burlesque variety shows. La Clique, for example (and it's current version La Soiree), are full of great performers, but I get a little depressed at way they work so hard to be "edgy" and "saucy". Variety was always something for everyone, these days it seems to be adults only. For me, that's a pity.

What do you think of talent shows like Britain's Got Talent?
I have always said that I'd only go on Britain’s Got Talent if my act could involve a bomb belt. Maybe a bit strong, but to be honest it makes me sad that pretty much the only place to see variety on British TV is such a tacky and cynical meat market talent show, especially when real variety is such a hot ticket in so many live venues at the moment. I have such happy memories of the shows of my childhood that inspired me to choose the life I have, shows hosted by people with a knowledge and love of the medium like Paul Daniels and Bob Monkhouse who would each week bring the most amazing comedy and variety performers from all over the world onto the little screen in my parents’ front room in North London.

People who say that a straight variety show wouldn't work on TV these days know nothing about variety or TV. You'd just have to make it well. Craft it with love and style and substance and you could show a whole new generation of viewers the amazing, hilarious, death-defying and beautiful things created by devoted, driven, creative professionals that are going on in variety theatres and clubs all over the world - including pretty much all of the cities that Simon Cowell's cattle calls will be held in. 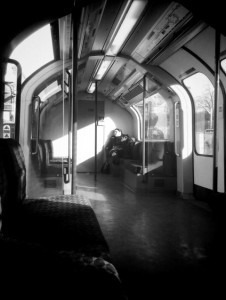 We love your photographs especially the Londony ones. If you could have access to any part of London to take pictures, where would you go?
Thanks very much. My photography grew out of my work situation - I travel so much, and always seemed to be finding myself in interesting places, so it made sense to document those crazy little adventures. Ironically these days I get the most pleasure from shooting portraits of Londoners. I'm not sure if there is a specific part of London that I'd like to have access to, that I currently don't. For me it's all about the people. I was born in London and have always lived here, so it's about the faces that populate the streets really. I want to be in the places that are the most accessible, and therefore have the most interesting people.

Who should we be looking out for on the London cabaret scene?
Well - all the obvious suspects I guess - Dusty Limits, Tricity Vogue, Sarah-Louise Young, Kiki Kaboom, Honey Wilde, Beatrix Von Bourbon, (gentleman rapper) Mr.B, Benjamin Louche, Desmond O'Connor - all amazingly talented and good-hearted people who I love to work with, watch and be silly with. But I'd also say don't restrict yourself to the clubs - if you want to see variety, then also get yourself down to Covent Garden Piazza on a bank holiday or a street theatre festival. Variety isn't dead, it's just in slightly smaller venues, and often outdoors.

What is your London secret?
It's got to be the greasy spoons. The amazing Piccadilly cafe was there since the 50's but has now sadly vanished, and the wonderful Maria who used to run the cafe on Henrietta Street in Covent Garden left years ago (she was my surrogate mother when I first started street performing - always ready with eggs and beans and a cosy bench at the back of the cafe. Probably the first meal I shared with the girl who became my wife was there) but there's still Diana's Diner on Endell street, and the Court cafe in Borough where you will be served by the delightful Carmelita. What is London without a mental map of places with formica tables where Italian mama-sans know my usual?

Mat Ricardo's one man show "MAT RICARDO: THREE BALLS AND A GOOD SUIT" will be at the Etcetera Theatre in Camden from March 3rd - 6th. Tickets are £8 and can be booked online here. For more information, you can ring the Etcetera Box office 0207 482 4857, or go to Mat's own site.