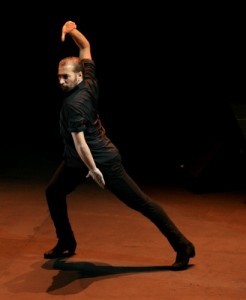 Forget frills. Forget flounces, polka dots and clacking castanets. None of that is the essence of real Flamenco. For Israel Galvan’s show ‘La Edad de Oro’ (‘The Golden Age’), everything is stripped to only the essential black-clad trinity of Bailaor, Cantaor, Tocaor (dancer, singer, guitarist).

Galvan takes the stage, and there is an immediate sense of power and presence in the silence before he begins to dance. Accompanied on guitar by Alfredo Lagos and by the at times hair-raising cante jondo (deep song) of David Lagos, we return to the melancholic roots of this art form.

Known in the circle for his frenetic footwork, Galvan’s feet are often a blur that would draw parallels with tap dance. Though undeniably contemporary in style, we stress that this is not fusion, there is an unmistakeable spirit that defines it as Flamenco. There’s a crispness and precision in his movement and in the motionless moments that kept our eyes fixed.

Galvan also dances unaccompanied, using the raised floor that sounds his footwork to the fullest, along with thigh slaps, finger clicking and even tooth flicks in the traditional Jerez style, drawing cries of ‘ole’ and ‘arsa’ from the crowd. It’s pretty easy to see why Galvan has been awarded almost every related prize under the sun. Though some might vilify him for being too avant-garde, we can confidently claim you’ve never seen Flamenco like this.

The Sadler’s Wells 8th annual Flamenco Festival will run until 19th Feb. Read our preview of the Festival to help you decide what to see.