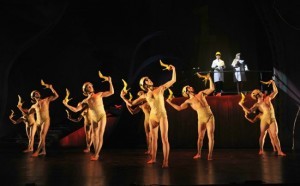 Stilettos, sling backs, sneakers and all that is in between, Shoes arrived in the Peacock theatre in Holborn last night, after its smash-hit premiere at Sadler’s Wells in September.

A camp extravaganza of all that is footwear, Shoes-the-musical is the brainchild of Richard Thomas whose other quirky contributions to the musical world include Jerry Springer the Opera and the operatic biography of Anna Nicole, premiering at the Royal Opera House tonight.

Fully loaded with tap, ballet, street and tango, there’s dance for all choreographed by a wealth of industry darlings and performed by a band of ardent, talented individuals. Interjected with witty words of wisdom such as ‘Time wounds all heels’ and ‘If you walk a mile in another man’s shoes, you are a thief’, Shoes is bursting with predictable but endearing clichés set alight by a vivid cast and a colourful set. In addition, there’s a lesson in stiletto wearing, a public address by Imelda Marcos and a whole ballad dedicated to the shoe God, Salvatore Ferragamo.

A fancy footwear dream commissioned by Sadler’s Wells, Shoes is at times as sparkly as a seventies sequinned platform but at others falls flat as a Birkenstock. Some shoes lend themselves to the musical stage; others seem a little forced, maybe something to be taken into consideration before Shoes takes the rest of the world by storm. Either way, as the exuberant cast warned the enthusiastic audience, ‘If you don’t like shoes, it’s going to be a very long evening’.

Shoes is at the Peacock Theatre until 3 April. The Sadler's Wells website has been having problems so call the box office to book: 0844 412 4300