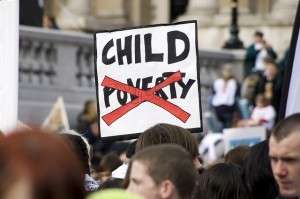 Update: James Cheshire has mapped the child poverty data against the cuts to the reduction in spending power for London boroughs on his Spatial Analysis website.

Save the Children has released a batch of statistics which highlight the shocking levels of child poverty in parts of the United Kingdom — with several London boroughs among the worst.

Among the 29 local authorities that the charity defines as having more than one in five children living in severe poverty are several London boroughs. The Guardian has mapped the data, and London comes out looking particularly bad: large swathes of the capital, including Southwark, Lambeth, Lewisham, Hackney, and Westminster, are above the 20% mark. The situation in Tower Hamlets is even more alarming: the borough ranks (alongside Manchester) as the worst in the country, with the rate of child poverty at 27%.

The government defines severe poverty as "a household with half the average income - for a family of four this would be pay of less than £12,500". But this bureaucratic definition masks some of the wider problems. A symptom of Tower Hamlets' situation is the poor nutrition of schoolkids: the borough has 42 fast food outlets per school, the highest in the country (compared with 25 for the UK as a whole), and a recent report suggested that some children are eating up to 16 takeaways each week.

Save the Children is calling on the government to intervene, and argues that proposed changes to benefits and the continued high rate of unemployment will tip more families into poverty. The government, for its part, is shying away from New Labour's reckless promise to "erase child poverty", and a Department for Work and Pensions spokesperson said that reforms will "help the poorest in society".