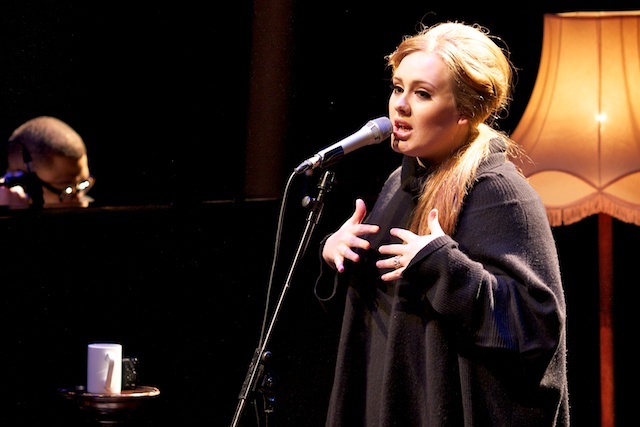 Things we learnt at Adele's album-launch gig at the Tabernacle last night include the fact that she loves Leona Lewis, she no longer drinks or smokes, her manner is humble and hilariously humorous and she seems unable to sing out of tune. You would not expect someone who has just recovered from a bad bout of laryngitis to sound as clear and note-perfect as Adele sounded through the stripped acoustic set of tracks from her debut, 19, and the just-released follow-up, 21, which - at the time of writing - appears to be heading towards the top of the album chart this weekend.

It's an album that has been lauded by critics and launched with new single Rolling In The Deep, which was also the show opener last night and the most up-tempo track in a set which consisted mostly of ballads. The idea of standing through almost an hour-and-a-half's worth of slow-tempo warblings is not one which would fill the average gig-goer with excitement. It is, however, a credit to Adele, her voice and her truthful delivery of these songs of love and break-ups that, by the time the final encore song, Hometown Glory, ended, one felt as though one could happily stay and listen to another hour of the stuff.

Among the highlights of the night were new tracks Set Fire To The Rain (Adele's so-called 'gay anthem', apparently written in response to her best friend dismissing Chasing Pavements as not being enough of a gay anthem) and the gorgeous Love Song, a cover of The Cure's classic. Conspicuously missing were Adele's brilliant Mark Ronson collaboration, Cold Shoulder, and the thundering new album track, Rumour Has It, which really ought to be a future single. But with a show as rewarding and touching as last night's was, one really mustn't grumble.

The whole show is available to watch now on Adele's official website.