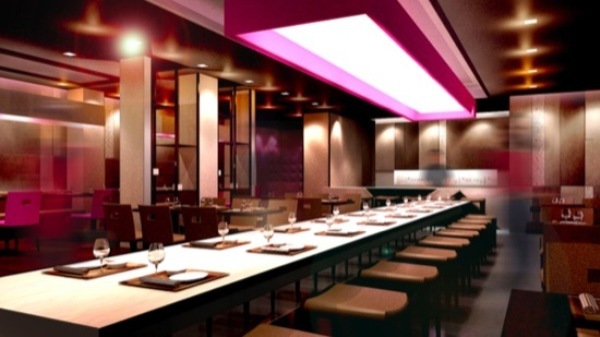 Ora Thai restaurant opened up on Little Portland Street with a medium-sized bang late last year. Manager Nok Murphy, a previous driving force behind Awana and Mango Tree, is at the helm and has recruited ex-Busaba Eathai chef Tamas Khan to head up the kitchen and ex-Quaglino’s mixologist Ivanic Branislav to man the bar.

Nok’s also determined to compete with the high-fashion of nearby Oxford Street, with a low-lit super-sleek black and pink combo giving the restaurant the feel of a plush bar. Staff uniforms designed by a former member of Italian fashion house Max Mara and bespoke bathroom toiletries created by luxury Thai spa brand Erb drive the point home, but were admittedly slightly lost on us. A branded board the like of which A-listers get photographed in front of at an awards ceremony stands presumptively in the foyer, and they're probably seeking planning permission for a "Paparazzi - this way!" sign. Well, we spotted Aggie there, so they can't be far behind...

Celeb syndrome aside, Ora manages not to fall too deep into the style-over-substance trap. A starter platter features some first-rate crab cakes and a super-savoury pork dumpling alongside traditional satay dishes and a less convincing (and culturally confused) prawn tempura.

Main course portions are small enough to allow for a variety to be ordered, and it’s worth trying some of the less-usual options on the menu. A salmon tartare salad, which hums with lemongrass and galangal, easily stands its own against a flavour-packed but decidedly mild Red Curry, some very garlicky (and very good) stir-fried morning glory, and a green papaya salad (som tum) which boasts a nice blend of sharp lime, salty fish sauce and hot chilli, though again feels slightly tame.

The inclusion of several Thai desserts on the menu (fruit in coconut cream, pandan jelly) alongside the obligatory ice-cream and fruit salad makes a good end impression, and friendly (though not fast) service and a smart cocktail list earn Ora a few extra points, too.

The problem is that at around £8 for a side order and double that for a main, London has plenty of much cheaper Thai restaurants offering food that’s just as good and often more authentic. Save Ora for a drink at the bar or a particularly good offer and in the meantime head to Thai Metro round the corner - unless you have a penchant for fashionable uniforms and collagen in the toilet, that is.