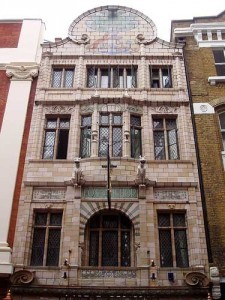 If you're thinking of spoiling that special someone to a romantic and luxurious night away from home, which boutique hotel would you pick? For boutique, think small (less than 100 rooms), luxurious, modern and - let's face it - not cheap. We asked readers through Twitter and Facebook for their recommendations and put together this list. But do you agree? Let us know in the comments. In no particular order...

The Malmaison, Clerkenwell
Sitting on the edge of Smithfield in a former nurses' home, the Mal has "97 sumptuous rooms and a super slinky-suite" with "great beds for sleepy heads, moody lighting, power showers, CD players, CD libraries, satellite TV". The decor is clean and sexy and there's a subterranean bar and brasserie serving local food and "superstar wines". You might feel miffed that wifi is only free for 30 minutes a day but if you're lucky you can bag a Friday night stay from £149.

Fox and Anchor, Clerkenwell
We've been told that staying above the Fox and Anchor (pictured) is "tres romantic". With just 6 individually designed and locally themed rooms this is perhaps the ultimate 'boutique' hotel. Just a few doors down from the Mal in Smithfield, the beautiful art nouveau pub's upstairs offers "king size beds, plasma screen and DVD player, state of the art Bose sound system, luxury Miller Harris toiletries, generous baths and drench showers" as standard. It's worth noting that the pub also serves some of the best chips in London.

Sister hotel, The Charlotte Street Hotel in Fitzrovia, also gets a big thumbs up.

Shoreditch Rooms at Shoreditch House
We had two strong recommendations for Shoreditch Rooms from readers who called it an alluring combination of both "perfect" and "highly recommended" and all at a "reasonable price". Attached to private members' club Shoreditch House, these 26 rooms come in tiny, small and small+ sizes (refreshingly honest for a London hotel where space is always at a premium) done out light and airy "featuring vintage twists within an urban setting". Prices start at just £85 for non-members, but you might want to fork out for a rooftop view if you're planning to get romantic.

Hazlitts Hotel, Frith Street
We're told Hazlitts is "wonderful". It certainly offers a refreshing change from the stark minimalism of so many modern hotels. Occupying historic Georgian houses on Soho Square, formerly the home of the eponymous writer, the hotel has traditionally furnished rooms but with all mod cons including air con and complimentary wifi. The waft of freshly baked croissants will hopefully make the double room rate starting of £230 a night slightly more palatable.

Sister hotel The Rookery in Clerkenwell, which boasts period charm from 1764, also gets an honourable mention from our readers.

The Sumner Hotel
This new Georgian townhouse hotel near Marble Arch enjoys the relative quiet of Upper Berkeley Street and is described as "very nice" by a reader. Balancing period charm with designer luxury it has just 20 rooms starting from £140 and rate includes wifi, air con and great big tellies.

No 11 London
We haven't been here but a look online suggests it might just be the boutique-iest hotel in town. Its Victorian facade on Cadogan Gardens, Knightsbridge conceals an opulent and theatrical "stately home" lodging with 60 rooms and 4 self-contained apartments. The tariff might include complimentary mineral water, wifi, posh toiletries and home-made biscuits but at £350 a night and upwards, we don't expect to be staying here soon.

myhotel Bloomsbury
Believe in it or not, myhotels are laid out along Feng Shui lines and aim to provide a calm and soothing night's sleep. The beds are comfy and it always smells nice but sometimes you just can't shut Tottenham Court Road up. Nonetheless, complimentary wifi, newspaper and thoughtful computer workstation means this is a popular and unintimidatingly trendy place to stay, with rooms starting from around £100 a night. There's one in Chelsea too.

The Hempel
Oh so fashionable, the "Zen-like" hotel designed by its namesake is where "art and design blend in alluring fashion." Minimalism is the order of the day and although you might expect it to be bursting with Patsy and Eddies, it is surprisingly affordable to stay at if you get yourself organised in advance. 5 star luxury in W2 starts from £144 a night. Ohmmmm.

The Zetter, Clerkenwell
Trendy, quirky and thoughtful enough to provide iPod docking stations, the Zetter is right at home in media-friendly, urban Clerkenwell. Each of its 59 rooms are individually decorated and reviews suggest its rooms and bathrooms are gratifyingly spacious. Home also to award winning Bistrot Bruno Loubet, overnight stays start from around £220.

You also wanted to mention The Hoxton Hotel but with 205 rooms it busts our boutique rules. And St Martin's Lane Hotel, Covent Garden might be totally designer swank - and one of you wants to live there - but its concept of "hotel as theatre" puts it in a different league to our bijou list here.

Image of the Fox and Anchor by Ewan M under a Creative Commons licence.

Disclaimer: links connect to our affiliate partner Gekko, who had no editorial influence on our selection