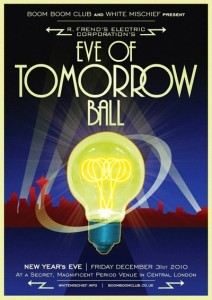 "New Years Eve? Ooh, what a conundrum," exclaimed a waiter overhearing our multiple-choice conversation at De Beauvoir's dainty A Little Of What You Fancy. Do you stay in and watch Jools? Invite some friends over? Go to theirs? Go dancing? Go and stand in the cold looking for fireworks? The possibilities are huge if you've got the cash, but coordinating your friends is quite the mission.
If dancing is your desire though, we've pulled together some of our favourite sounding nights that all come with the Londonist seal of approval.

New Years Eve @ Dalston Nest: Tickets £15.
Since transforming from Barden's earlier in the year, The Nest, thanks to its connections to Fabric, has had no shortage of the freshest, most cutting edge electronic talent on its decks. New Years Eve doesn't change their strategy as Jesse Rose headlines a lineup that also includes Boy 8 Bit and Rachel Barton. Rave it up.

Ultimate Power @ The Scala: Tickets £20
Air guitars at the ready! For a cheesy rock option, we've heard nothing but good words about Ultimate Power. Whether it's Guns and Roses, Bon Jovi, Meatloaf or even Phil Collins that gets you going, this night of solid power ballads and singalong rock means January 1 will probably be spent talking in very hoarse tones.

Bugged Out @ XOYO: Tickets £28
Legendary London dance night Bugged Out continues it's residency at Old Street's XOYO by teaming up with 90's r&b and dance night 'Pump Up the Volume' for New Year's Eve. DJs include Friendly Fires, Riton, L-Vis 1990 and Lou and Nova.

Good Times @ The Garage / Clapham Grand: Tickets £35 (North, South)
Norman Jay's Good Times covers both North and South London with two events that will see Jay himself and Gilles Peterson running across the Thames to play at both venues. Normally we're used to dancing to Good Times at Notting Hill Carnival but have no doubt that its feel good vibes will happily distract from the freeze outside. Also on the Islington bill are Ladybugz and Crate Diggers while Junior Boy Terry Farley and Rudy Ranks join the headliners in Clapham.

Eve of Tomorrow Ball @ Secret Location : Tickets: £45+
Londonist favourites White Mischief combine forces with The Boom Boom Club to invite you to join them at Ronald Frend's Electric Corporation in 1930's London. Featuring cabaret, a circus, robotic waiters, liquid nitrogen ices and for some a currency to invest in the shadowy corporation, we've no doubt from previous events that this'll be worth the hefty fee. Dressing up is encouraged and you can shake your wares until 5am.

Midnight in Manhattan @ Ronnie Scott's : £60
An upmarket glamourous choice for the night, upstairs at Ronnie Scott's will be hosted by American jazz singer Kai Hoffman for a party that plans to make like it's 1959. Your finest 50's vintage dresses should be out for the night as Kai and her Cats celebrate with jazzy jive, rock and roll and speakeasy-style fun.

Together @ Brixton Academy: Tickets £60+
The biggest dance party in the UK this New Year, Together heads to Brixton Academy with Mark Ronson headlining a night that runs all the way till 6am. Annie Mac, Fake Blood, Herve, Zinc, Krafty Kuts and Evil Nine make up the rest of the bill which reads pretty much like a dream-team in the world of dance music. Top this off with a midnight PA from Katy B and you're getting your money worth in terms of big names.