Santa Claus Is Coming To Town…In A Transit Van 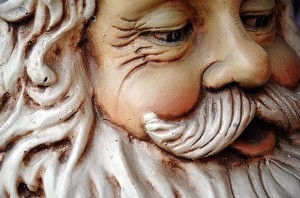 To those who say that nothing ever happens in the Borough of Sutton, we say 'ha!'. We've found something. The Sutton Guardian reports that Santa is preparing to tour the streets of Cheam in aid of local charities. The best bit; he's giving his reindeer a rest and doing it in a Transit Van.

The Cheam Rotary Club’s Christmas float has raised festive cheer and thousands of pounds for charity over the past 45 years, and will begin this year’s tour on Sunday 5th December.

The sleigh is more than six metres long and three metres high and will tour the streets of Cheam asking for donations in the run up to Christmas. Last year’s float raised over £8,500 for Sutton charities.

Many local residents are organising parties on the evenings of the sleigh’s visit, so why
not wrap up warm and get in the festive mood. The full list of stops can be found here.

By Jon Davis. Image by Cakehole in the Londonist Flickr pool.