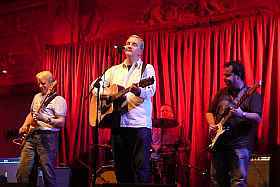 Darren Hayman treated us to rare set performed entirely on the venue’s grand piano, tucked away in the corner of the room, accompanied only by a trumpeter. Performing a set spanning his career, the set list was well suited to the stripped down arrangement. From Hefner classics including “Don’t Flake Out on Me” & “Fat Kelly’s Teeth” to “Be Lonely” and “Dagenham Ford” from his latest album, the critically acclaimed “Essex Arms”, the stripped down set brought an extra poignancy to his songs.

Despite his intention not to talk between songs to create a atmosphere, he couldn’t resist reassuring the audience that he was wearing trousers under the piano, and showing support for Paul Chambers, at the centre of the twitter joke trial furore, shouting out the now infamous tweet.

Headlining the night were indiepop veterans, The Orchids. Formed in the eighties, and originally on legendary indie label, Sarah Records, the band reformed 6 years ago after a lengthy hiatus. Reminiscent of Teenage Fanclub, The Go-Betweens and fellow Sarah Records label mates The Field Mice, they helped pave the way for bands such as Belle & Sebastian. Attracting hardcore fans and fresh faced converts, the crowd were treated to a mix of old favourites, as well as newer material including recent single “She’s My Girl”. After all these years, they’re still sounding fresh and can show younger bands a thing or two.