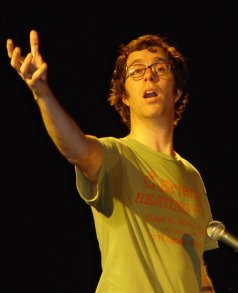 Islington’s most famous Arsenal-fan-muso-author Nick Hornby and American piano-rocker Ben Folds might not be the most obvious match for each other.

But the pair have managed to overcome any confusion over what 'football' is (no news on whether Folds has heard of Arsenal) to team up on 'Lonely Avenue', an album which marries Hornby's lyrics with Folds' music. You might have heard the single 'From Above', a catchy track that's been doing the rounds on 6 Music recently.Given the new record's obvious London connection, it's no surprise that Folds is making a brief trip to the UK next year. Along with his grand piano, he arrives here to play the Hammersmith Apollo on 20 February.He might not be particularly fashionable, but the geekish pianist certainly has a track record of demonstrating that you don't have to brandish a guitar to stay true to the spirit of rock. His live performances are full of energy, bite, irony and good humour - which most obviously manifests itself in an inspired cover of Dr. Dre's 'Bitches Ain't Shit'. We'll be very surprised if that one doesn't make an appearance.Previous London gigs have seen Folds wheel out a mix of solo stuff and older Ben Folds Five material. A spot of piano smashing is the norm, and he typically shows a genuine appreciation of his fans' loyalty too. Which, frankly, we expect, given that tickets are a steep £35 each.Ben folds plays the Hammersmith Apollo on February 20. Tickets are available now. (Image / deovolenti under a Creative Commons Attribution licence.)