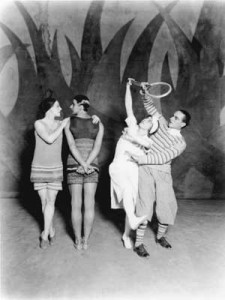 The most influential dance company of the 20th century is the focus of a major exhibition at The V&A. Diaghilev and the Golden Age of the Ballets Russes 1909-1929 is an exceptional opportunity to venture into a magical time when dance was at the very centre of the avant-garde movement.

The world-famous ballet company, strictly directed by the charismatic Russian Serge de Diaghilev, is known for its collaborations with vital avant-garde artists, composers and designers such as Pablo Picasso, Igor Stravinsky and Coco Chanel. A melting pot for the modernist avant-garde The Ballet Russes brought together dance, music and visual arts in "total artwork".

The theatrical exhibition rooms with dramatic lighting and striking black and red walls guide you through cabinets full of original, colourful and exotic costumes, musical scores, set designs and drawings from more than thirty ballets produced by the oft-scandalous company. A significant section is dedicated to the famous ballet Le Sacre du Printemps which caused tumult when performed in Paris in 1913. The riotous music and modernist choreography in which freely moving bodies performed ritualistic, aggressive movement radically challenged the accepted definitions of ballet and classical music.

Unfortunately, relying too heavily on educational videos, simplistic explanations of what dance and choreography are and conventional talking head spots from the most famous of today's choreographers and performers, the exhibition falls somewhat short of conveying the revolutionary impact the Ballet Russes had on dance and society. Some of today's cutting edge dance starts might have usefully been used to demonstrate this. That said, this is an, enthralling and evocative 'must see' exhibition.