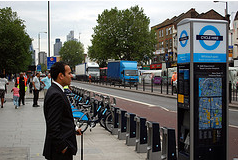 After teasing the idea in the summer, Boris Johnson has stated that the Cycle Hire scheme will extend eastwards in time for the Olympics.The system's current easternmost station is opposite Whitechapel station, but the Mayor has confirmed that new stations will be built in Bethnal Green, Mile End, and out towards Canary Wharf and the Olympic Park, comprising 2,700 new docking points and 2,000 additional bikes to service them.Great news for those living in the east end, but south Londoners will feel aggrieved that they've been overlooked again. The network touches along the northern stretches of Southwark and Lambeth, but doesn't penetrate farther south than Kennington.Meanwhile, there's still no word on when the system will be available to non-members; in September TfL said it would be by the end of the year, but there's been no update since.