Boris: "One Of Our Domain Names Is Missing" 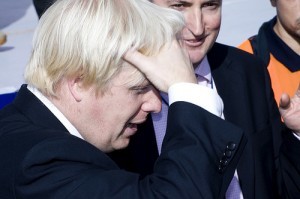 A genuine administrative error, or a telling suggestion of hubris at the heart of Boris Johnson's electoral machine? The crockery is flying at City Hall right now after one of the Mayor's domain names was left to rot, and subsequently re-registered by another, unknown person.

During the run-up to the May 2008 election, http://backboris.com was the chief online HQ for Boris' insurgent campaign, and you can still see it at the Internet Archive, where, like an online Mary Celeste, it drifts aimlessly through cyberspace, warning about "Labour dirty tricks". However, with the election won, the site's registration lapsed in July 2008, and the domain was subsequently bought by persons or groups unknown: it is currently serving generic ads and little else besides.

Boris has scrambled his minions to try and recover the domain name, but inevitably questions are being asked about the clandestine character who has taken ownership. A clever trick by 2012 election rival Ken Livingstone, perhaps? Though the erstwhile Mayor and one-time GLA leader is no stranger to fiendish tricks, we don't suspect he has the savvy to have perpetrated this (besides, in mid-2008 he was too busy tending to his garden).

However, there could be something on the Labour angle: another prominent politician, one who has re-invented himself as a social media whizz and a firm believer in the powers of the internet.... step forward John Prescott, we know it's you.