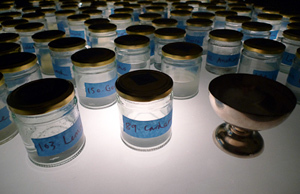 "I've got good news. That gum you like is going to come back in style"; as the wee man tells Special Agent Dale Cooper (in one of the least-explained asides in Twin Peaks). But thank goodness it has, since what better way to spend half term with the little ones than making a mess someone else has to clear up before stuffing their faces with latex? Ahhh, sweet mastication.

For one week only, Bompas and Parr - further perpetuating their stance as being complete Wonkas - have created an artisanal chewing gum factory in Whiteley's* Gold Cave that Violet Beauregarde would be proud of. Visitors can choose exactly what flavour they'd like their gum to be, whether it's sugar and spice and all things nice, or frogs and snails and puppy dogs' tails. Almost.

There are 200 flavours divided into a spectrum of fruits, puddings, nuts, booze, meats and spices, with almost 40,000 possible combinations available from the cavernous Flavour Library. Some - like cotton candy and hot dogs - are designed to indulge childlike tastes, with others geared towards a more refined palette, such as gin, Foie Gras and quince. Popular creations to pop out from the hand-crafted factory so far have been mostly fruit based, although lamb and wild mint, bacon and caramel, and even vanilla and moss made a surprise appearance last night. You could treat yourself to a tantalising taste of lobster and champagne too, if the mood takes you (and you can get an unfortunate prior whiff of shrimp head out of your nostrils). For special agents, there's damn fine coffee, but no cherry pie. Smoke, but no fire (unless you count curry).

*That's the department store, not a Harrods-esque shrine to the late Countdown presenter

Gum costs £2.50 a pack. Open midday until 6pm, first come, first served, no booking, under 18s must be accompanied by an adult, no ball games, do not sit on the grass. Follow the Signs to the Fashion Pop Up at Whiteley's Shopping Centre. Until 31st October