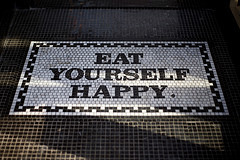 Lots going on and much to take in during this year's London Restaurant Festival. A “citywide celebration of eating out”, the festival (now in its second year) is the brainchild of London Evening Standard restaurant critic Fay Maschler and restaurant consultant Simon Davis.

From Michelin starred restos to PizzaExpress and all sorts of eateries in between, more than 800 restaurants are involved. For example, one of our newbie faves, Dishoom, will offer a host of special offers including breakfast for just £5 and a “veritable Bombay banquet” for only £22.50 per person.

Other highlights include the “Ramsay Eye Opener” charity auction for Gordon Ramsay pop up night at The London Eye; an AA Gill/Jonathan Meads v Rosie Boycott/Janet Street Porter debate about French cuisine; a a foodie quiz with Anne Robinson at the helm, gourmet street food served from an airstream; and a grand finale suppliers market at Old Spitalfields.

LRF will take place from 4-18 October 2010. For much more information visit www.visitlondon.com/londonrestaurantfestival.