Football's Most Haunted: Taking A Ouija Board To Highbury

By Londonist Last edited 118 months ago
Londonist Football's Most Haunted: Taking A Ouija Board To Highbury 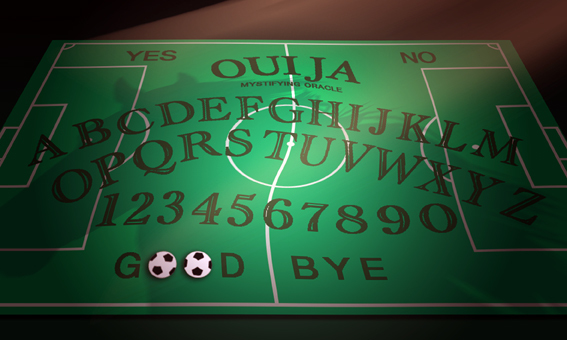 For a bit of Hallowe'en fun, five football fanatics interrogated the ghosts of Highbury through a Ouija board. The highlights can be heard on Resonance FM tonight, but first Chris Roberts sets the spooky soccer scene.

It’s a popular complaint amongst contemporary football fans that the game has changed beyond recognition and money is ruining everything. Some counter this by saying it was always about money and dodgy deals. In order to get to the bottom of this Café Calcio (a football show on London’s art radio station Resonance 104.4 FM) decided to ask supporters from another era what they thought.

In a cross over between Britain’s Most Haunted and Football Focus they set up a séance at the old Arsenal Stadium. Highbury is an ideal choice. It is said to be haunted by the spectre of Herbert Chapman, Arsenal’s most successful pre-war manager, and the shade of a horse who died during the construction of the North Bank. Add to these the fact that dozens and dozens of die hard Gooners have their ashes buried behind the old goal at the Clock End and former Arsenal Stadium has as many dead as a reasonably busy cemetery.

On a misty Autumn night, three Arsenal fanatics - plus Chris Dixon (a Crystal Palace supporter) and Chris Roberts (Everton) who were there to ensure some sort of spiritual equilibrium - met in a flat in the former North Bank to talk tactics with a team from the other side via the dubious medium of the Ouija board. Among the Arsenal fans was the great grandson of Sir Samuel Hill Wood, the chairman during Herbert Chapman’s reign.

True to 1970s hooligan form, a few naughty spirits opted for the “we are evil” option and had to be ejected from the Ouija board. However with the old pitch in the background and the three Gunners with their fingers on the pointer the board started to answer such vital questions as:

Is the club’s financial situation secure?

The spirit world also offered opinions on Arsene Wenger, David Dein and the role of money in the game today. Highlights will be broadcast can be heard on Resonance FM tonight at 9pm, alongside a feature on soccer stadiums as sacred places and a piece on Herbert Chapman and his influence on football. A special forty minute podcast of the séance will follow on Halloween itself.

Disappointingly we never got the ghost of Chapman himself and have no plans to try again at Hendon St Mary Parish Church where he is buried.

By Chris Roberts. Image by Daniel Morgernstern. Tune in to Cafe Calcio - a football fanzine radio show broadcast out of London on Resonance 104.4 FM - tonight at 9pm to hear more. (Repeated Saturday at 15:30.) There's an audio preview here.