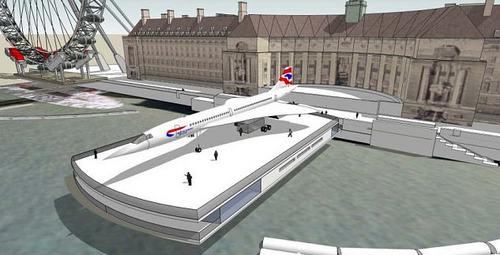 A decommissioned Concorde jet currently languishing at Heathrow airport could get an unlikely lease of life, as a new tourist attraction on the Thames.A £22 million plan would see the superannuated, supersonic aircraft transported onto a double-decker floating pontoon near to the London Eye. The jet would sit on the top deck, allowing the general public close-up access to an aircraft normally seen by only the filthy rich and fabulously famous. The lower deck would contain an exhibition on the history of Concorde.The aircraft itself is Alpha Bravo, which last took to the skies in 2000, and is the only one that remains in the hands of British Airways. It was almost sold to Dubai last year; a permanent home in London seems a more fitting resting place.