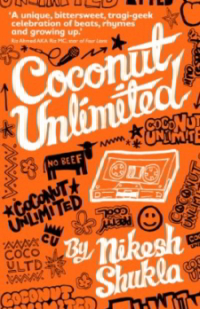 Growing up in Harrow in the mid 90s, Amit is confused. He's Indian, but his ambitious parents send him to an almost-entirely-white private school. Along with his two friends, Anand and Nishant, they have racial abuse heaped on them by their classmates and teachers - but their education marks them out as coconuts by the Indian community. So they respond by wanting to be black. Specifically black hip hop artists, but that's not easy in the days before Spotify and Napster and you haven't got a clue what this Nas guy sounds like.

We suspect Coconut Unlimited is partly autobiographical and Shukla avoids patronising Amit, drowning in the universal teenage feeling of not belonging - but not without reason - by turning on the self-deprecation. Amit's earnestness as the boys form their own band and desperately try to absorb black culture provides hilarious contrast to his wheedling negotiations over homework and terror around St George's Shopping Centre and the local drug dealer.

Nikesh Shukla is a performance poet and his ability with rhythm is obvious in the flow of the prose, and he skillfully constructs the tentative teen raps so that even white indie fans can hear the beat in their heads. There are also moments of toe-curling recognition and wonderfully drawn snapshots of Indian life. (We particularly loved the guide to Gujarati/English slang.) And while Coconut Unlimited is an excellent partner for a couple of hours on the sofa we would recommend trying to catch the author doing a reading; we were impressed at Literary Death Match and think he's not to be missed.