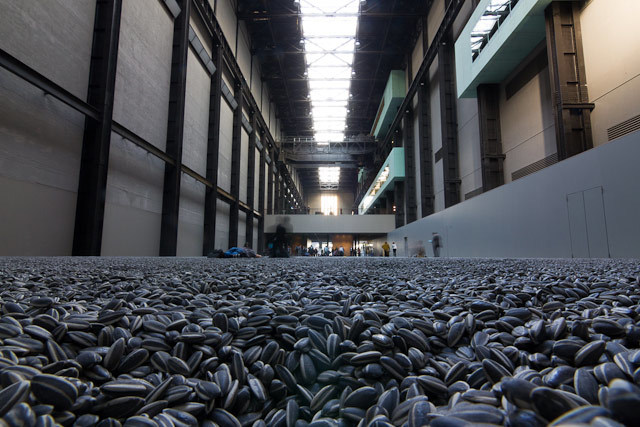 The Tate's Turbine Hall has been filled with sunflower seeds. 100 million of them, weighing about 150 tonnes, carpet the Hall's eastern flank. A few centimetres deep, they crunch charmingly when walked across.The blurb for Chinese artist's Ai Weiwei's installation, the 11th in the Unilever Series since the gallery opened in 2000, runs the risk of censure from the Campaign for Plain English. "What you see is not what you see, and what you see is not what it means", the sombre curatorial message reads. Yet there is truth to this gnomic statement. The seeds are not real, they're fashioned from ceramic (we're waiting for the inevitable legal case when somebody loses a molar after nibbling on one). And each one is unique, individually hand carved by an army of artisans working in the city of Jingdezhen. They've spent two years working on them just so they can be crushed under the sweaty feet of Londoners.

For Weiwei, whose relationship with the Chinese authorities is difficult, and occasionally violent — despite working on the Bird's Nest stadium for the Beijing Olympics, he subsequently became disillusioned with the government, and has been savagely beaten by the state police force — the seeds represent the famine under Mao, and also the propaganda used during that era where Mao's face would be the sun, and sunflower seeds would represent the people, turning toward him for sustenance. How the Chinese will react to this new project from the country's most prominent artist, coming a week after the Nobel Peace prize was awarded to jailed democracy activist Liu Xiaobo, should be interesting to see.

More than any Turbine Hall instatllation since Olafur Eliason's The Weather Project, this is one that will be made by the people who use it. As the cold nights draw in, it could become an enjoyable hideout from winter, full of people making 'seed angels', building sculptures and treating it like the beachside attraction London never had.The Unilever Series: Ai Weiwei opens tomorrow at Tate Modern and runs until May 2nd 2011. Entry is free.