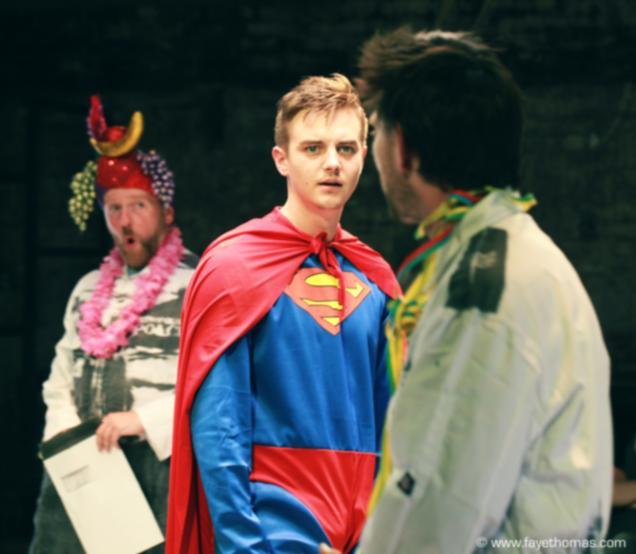 (c) Faye Thomas
The politics of freedom and oppression are the subject of The Factory’s latest play, Boiling Frogs. The Factory has gained a reputation as an experimental theatre group. Their first production was The Hamlet Project in 2007 where the audience brought along random items which become the props and helped choose whom amongst the cast played each role.

Their latest production lacks the original interaction but no less imaginative. The five roles are played by different members of the cast each night but this is pre-determined. Instead of an established play in different venues, The Factory are using an original story for their run at the Southwark Playhouse.

The staging is notable due to there not actually being a stage. Instead, four sides of the room have raised benches while the action happens at floor level with most of the props (including guns, keys and desk) made from crudely painted wood and uniforms from painted overalls. The notable exceptions are the four striplights which hang down and form the corners of an imaginary cell, the solitary scene throughout the play. Its in this cell that we find Mark Stone, a protestor who makes Swampy look like a couch potato, and a policeman. Mark runs verbal rings around his captor and demands his release. The policemen have other ideas...

As the story progresses, we are introduced to Mark’s accomplice, the policeman’s boss and someone who is neither cop nor co-conspirator. Each of these is given a particular moral viewpoint; indeed, the play sometimes seems like an anthropomorphic version of “Philosophy for Dummies” (there are no prizes for guessing which role may as well be labelled “Nietzsche”). This is in no way a bad thing considering how much unchallenging material there is on London stages.

Be prepared for twists, turns and an ending that will haunt you as you scarper into the Southwark night. “Freedom is just another word for nothing left to lose. But nothing ain't worth nothing but it's free.” Janis Joplin may have had a point there.

Boiling Frogs runs to October 2nd at the Southwark Playhouse. Tickets are available from the online box office.