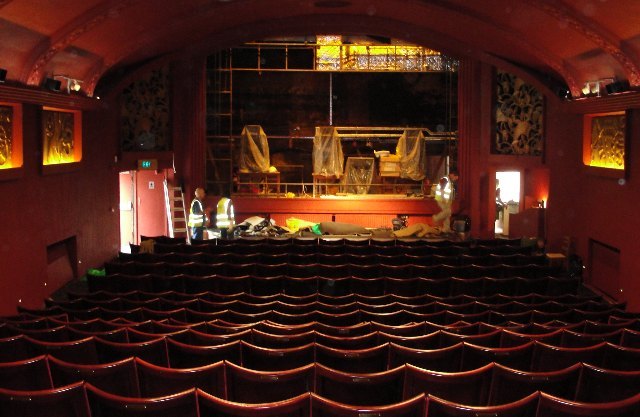 Over the next few months Londonist will be visiting some of the city's independent cinemas, and we're kicking things off by heading to the Phoenix in East Finchley, celebrating its centenary - it's thought to be one of the oldest continuously-running cinemas in the country - with a huge restoration project.

Already a firm local favourite with a beautiful art deco auditorium, the charitable trust that owns the cinema has been fundraising for several years to bring the Phoenix into the 21st century and its history back to life. So they've fitted air conditioning and new lights, restored the original colour scheme and sorted out the auditorium's ugly back wall by digging two more of the 1938 wall panels out of storage. A brand new cafe area and balcony have also been created, making the building a place to hang out as well as watch films.

The Phoenix re-opens tonight after a six month closure with Stephen Frears doing a Q&A for his new film Tamara Drewe. Regulars will know about its brilliant Sunday double bills (themed oldies), but these are on the back burner for the rest of the year as they run a Century of Cinema, free screenings of films from each decade including King Kong, Casablanca and Saturday Night and Sunday Morning.

And, very importantly, the snacking at the Phoenix is great - even before the new cafe. You can buy homemade brownies and other cakes, but if you want to stick with tradition they price their drinks and popcorn at a very reasonable £1, £2 or £3.

Corrected: 10 September 2010, 15: 30. The Phoenix is 'one of the oldest continuously-running cinemas' in the UK, and not 'the oldest' as previously stated. (The honour, in case you were wondering, goes to the Duke of York's Picturehouse in Brighton. Thanks to @GreatGreenWorld for correction.)