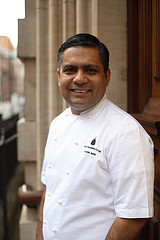 Londonist has been an appreciative fan of Executive Chef Vivek Singh since reviewing his Anglo-Indian brekkie menu little more than a year ago. His refined but accessible dishes, served in the lovely settings of Cinnamon Club and Cinnamon Kitchen, are well worth chatting about. Here's his Chefspective take on things  as well as a scrumptious recipe for black bream that he was kind enough to share.

Could you share with us a little bit about your background and how you came to be an executive chef in London?

I grew up in a coal mining community in Asansol, 200 km from Calcutta in West Bengal. My father was a mining engineer and as a result most of my childhood was spent in small towns in Bengal, Orissa and Bihar.

After having finished my schooling in Orissa, I moved to Delhi to do my Hotel Management for three years. I then worked for another two years in Delhi, two more in Mumbai, two years in Calcutta at the Oberoi Grand, and then in Rajvilas Jaipur for another two years before moving to London to set up The Cinnamon Club in 2001, followed a little later by sister restaurant Cinnamon Kitchen in 2008. It has always been my passion to create modern, innovative dishes that challenge people’s perceptions of Indian cuisine.

Londonist has been a fan of Cinnamon Kitchen and The Cinnamon Club for quite some time. What's the secret to your success and how would you say your restaurants differ from other upscale Indian restaurants in London?

The Cinnamon Club and Cinnamon Kitchen combine the best Indian spices and techniques with the very best British and seasonal produce to create a unique marriage. Our ethos is to constantly evolve and push boundaries so diners experience something new time and time again.

Not to downplay the fab food but both your venues are in fantastic and unique locations. How import is setting with respect to dining? Did you have much of a role in deciding on where your restaurants would be?

Yes, the setting has a hugely important role to play as it sets the tone for the evening and creates a story and a sense of occasion. From the grandeur of the Grade II listed building housing The Cinnamon Club to something more informal like the old East India Company’s spice warehouses where Cinnamon Kitchen is set, each tells a story and forms an integral part of the experience.  I do have a say on the location, but in the end it’s the instinctive feel of the whole team.

For the upcoming London Restaurant Festival, you've teamed up with Michelin starred chef Simon Rogan of L'Enclume in Cumbria. Can you describe that collaboration? How do the two of complement and contrast each other? Did the two of you learn anything off each other?

Simon and I have never cooked together before and we both have very different styles so the menu was even more of a challenge! We have blended the spicy sophistication of Cinnamon Kitchen with an innovative and experimental approach that Simon is renowned for. We obviously know of each others work and I'm sure we will have learned a few things from each other by the end of the lunch service.

Where do you like to dine and shop for food and drink in London?

I’ve always been a big fan of Selfridges Food Hall, I can spend hours in there if I’m not careful! I love visiting Tooting High Street - it has some of the best Indian restaurants in London and food markets too - both are great shopping and eating adventures.

Wouldn't happen to have a simple recipe for our readers to create at home?

In response to this last question, Vivek provided us with the following recipe:

First make the kachumber. Place the diced cucumber, carrot and tomato in a mixing

bowl. Whisk together the salt, sugar, lemon juice, olive oil and coriander to make a

dressing and mix it with the diced vegetables. Check the seasoning. Mix together all

the ingredients for the marinade, rub them over the fish and set aside for 10 minutes.

down, and sear for 3-4 minutes, until well coloured underneath. Turn and cook for

another 2 minutes or until just cooked through.

To serve, place the Roasted Aubergine, Tomato and Potato Crush in the centre of

each plate and put the fish on top, then drizzle the kachumber around the plate.

For more about Chef Singh and his restaurants visit www.cinnamonclub.com and www.cinnamon-kitchen.com.