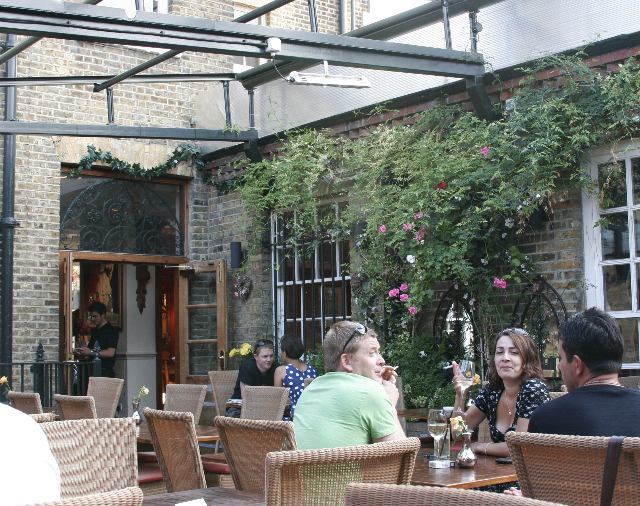 Sundays seem like they're made for the lazy enjoyment of wine, which is why it's a shame that so few of the capital's dedicated wine bars are actually open. (What do you mean, they need a rest?) There are, fortunately, some exceptions to this such as Carvosso's at 210: a former high street police station that has, since 2006, been offering an interesting food & wine selection to Chiswick for 365 days a year.

On entering you'll encounter a pretty little bar which feels a little like the extension of someone's house: its cosy, oak-panelled rooms overlook a large courtyard which has been decorated by colourful flowers, ivy and ornamental mirrors. It is, in fact, an idyllic spot in which to while away a Sunday afternoon, reading the paper, sipping wine and generally feeling as if there is no such thing as Monday morning.

The amusing thing about their wine list is that, much like a Chinese takeaway, you signal your selection to the waiter by quoting the number next to its name. On the one hand, it does look as if you’re an expert on vintages when you start ordering bottles of the ’64, but on the other it’s hard to shake off the feeling that your wine might come with a bowl of prawn crackers. Nevertheless they do have a generally sound list and, based on our experience, we'd recommend the citrussy Viognier and the intriguing, fruity white from Argentinian vineyard Finca Sophenia. If you're particularly thirsty they also have a large range of magnums (both red and white), although we should mention that prices have gone up since they put the list on their website.

Unlike many wine bars their food has been influenced by a variety of cuisines and subsequently we worked our way from a crispy prawn tempura (£7) to an Eton mess (£5.50) which was as delicious as it was pretty. A cheaper option is also available in the 2 course set menu (£16.50), which includes their tempting Sunday roast, and there are even private dining rooms available for special occasions. Although the service was slightly slow we have no other complaints about our visit and we'd definitely come back to Carvosso's, any day of the week.

Carvosso's is open 365 days of the year and is at 210 Chiswick High Road, W4 1PD. For opening times click here.