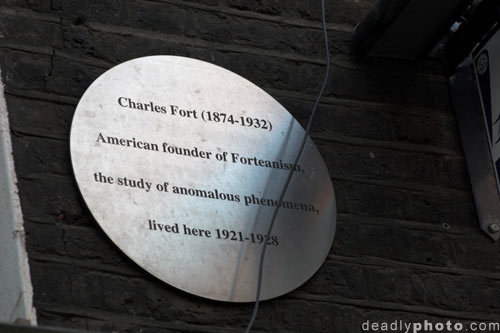 This Friday, 6th August, is the 136th birthday of Charles Hoy Fort, the American writer who reluctantly gave his name to the point of view known as Fortean. Reading Fort's books has been described as ‘riding the tail of a comet’; his writing style is like following a trail of increasingly bizarre notes until you reach the end, look up, and see what amazing place you have been lead to.

He wrote about UFOs, psychic ability and frog-falls - amongst countless other wonders - without dogma or prejudice and was as against superstition as he was the arrogance of the scientific establishment.

In 1921 he and his wife Anna left his birthplace of Albany, New York - and Fort’s violent father - to begin a “grand tour” of the British Library, then part of the British Museum. They lived in rooms at 15 Marchmont Street, then in a flat at 39A Marchmont Street. Over seven years Fort read every possible scientific journal he could find, making notes on anomalies, and writing his four books: The Book of the Damned, New Lands, Lo and Wild Talents.

Fort would regularly visit Speakers Corner, occasionally speaking there on space travel. Anna remembered that in London Fort “used to stand in the street and gaze at the stars and point them out to me and tell me the meaning of it. Then up in our rooms he would throw open the windows and stand gazing at the stars. That was his delight for a long, long time.”

It was in London in March 1924 Fort had his “average experience with magic”, picture frames kept falling from the walls of his home and Fort, taking at interest in psychic ability at the time, wondered if he was causing it to happen. He would think of the frames, they would fall, so he experimented further. When the frames ceased to fall Fort concluded “Well if I’m not a wizard, I’m not going to let anyone else tell me he’s a wizard.”

Fort died in New York in 1932. He was adopted in name, if not always in spirit, by all manner of people calling themselves ‘fortean’. Fort himself had to be tricked into attending the first meeting of the Fortean Society in New York in 1931 and said it “might go some place, such as Orange, New Jersey” and that he “wouldn’t join it, any more than I’d be an Elk.”

Fort’s horizons were boundless and in his day he lamented that “the majority of people attracted are the ones we don’t want; Spiritualists, Fundamentalists”. Fortean London will write about the strange things in our city but will always do it with an open mind, a gimlet eye and hopefully something near the wit and energy Fort projected into those who call themselves ‘fortean’.

There will be a brief birthday celebration outside Fort’s home at 39 Marchmont Street, which has a plaque above it dedicated to Fort, at 6.30pm on Friday 6th August. Fort would enjoy beer and cheese with friends so there will be a toast, a short reading. Then we shall write FORT across Bloomsbury in a pub crawl in his honour visiting the Friend at Hand, Old Red Lion, Rugby Tavern and Truckles of Pied Bull Yard. All but the worst fundamentalists are welcome.

39a Marchmont Street Plaque thanks to Dave Walsh and the mighty Blather.

After the pub crawl Fortean London will be taking a break until September when we shall return with more London mystery and lore.