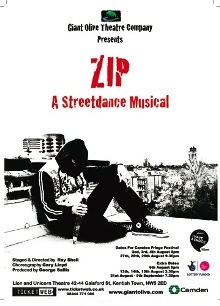 Unpredictability is a charm of The Camden Fringe. Picking a gun and knife crime streetdance musical as the first of our shows for 2010 was risky but fortune really does favour the brave and Zip had us by our vitals from the very start.

A group of kids, high on coke and booze, crash out in an abandoned church rumoured to be haunted. It is, by the ghosts of 'the merked' all the local kids who've been teen victims of gun or knife crime. The church is also favoured as a hideout and gun stash for the hapless Kalipha Krew whose most mixed up member, Tru Blond, is responsible for shooting a kid - the now ghostly Selky - earlier that day. The Krew and their partied out peers get locked in conflict at gunpoint. Who will kill who? The police are coming. One lot has drugs, the other guns. They're a bunch of mixed up kids from diverse backgrounds, struggling to make their way in a London of postcode wars, celebrity culture, troubled families and neighbourhoods rife with crime.

Commenting on the action like a tragic Greek chorus, the merked reflect on their own untimely demises delivering knock out urban song and dance routines with beatboxing, rapping, diva-style singing, funky breaking and bags of attitude. The cast are fresh and strong performers giving it their all. Think Skins meets Kidulthood and gets mixed up with Streetdance 3D.

The show lays bare the issues and excites, entertains, provokes and moves you but doesn't claim to have any answers. You'll leave with the soulful voices of the merked singing that "it's not my fault".