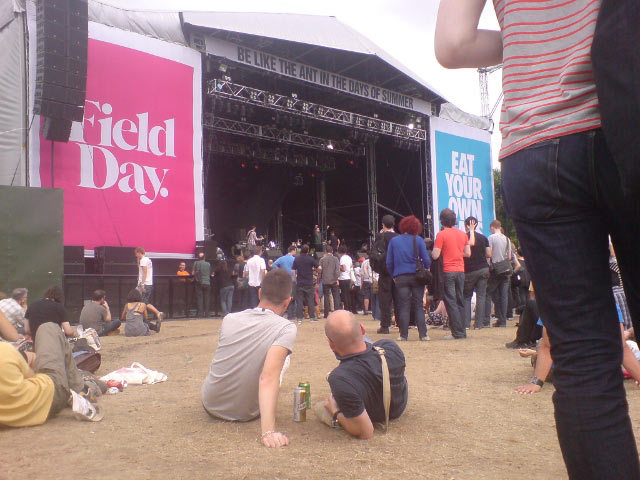 “Arm yourself.” That’s what we were told as Beta Band frontman Steve Mason finished his set at this year’s Field Day, which saw an estimated 25,000 revelers cram into Victoria Park at the weekend.

“Bomb the banks, get rid of the whole lot. The longer we leave it, the bloodier it will be.” Mason’s cry to arms came after a solid set, playing songs off his new album Boys Outside, which mixes reggae beats and 90s Britpop.

Sadly Mason’s call to arms was not taken up by most of the day’s acts, which produced lacklustre performances. The Icelandic band Amiina, which has toured with Sigur Ros, delivered a pretty yet profoundly boring performance. The darker, and much more interesting These New Puritans spearheaded by Jack Barnett who wore chain mail, had some truly awesome moments but altogether gave an uneven performance of post-punk cacophony,

The highly anticipated Gold Panda, hailing from Essex, proved a popular draw rocking the Blogger’s Delight Stage with uninventive beats. Matthew Herbert did his best, mixing discordant sounds whilst trying to mount a silver step ladder. But neither acts hit the mark.

Even Caribou who are usually exceptional live, weren’t able to connect with the crowd. It was only their last song of the set, Sun, off their new album Swim that really had momentum. And even the legendary band the Fall, fronted by the notorious Mark E. Smith, delivered a good but altogether forgettable performance.

It was the indie darlings Phoenix who dazzled festival goers with a truly inspired set. Rocking the crowd with singles Lisztomania as well as old favourites like If I Ever Feel Better, the boys from France almost made us forget how bland this year’s performances were - almost.