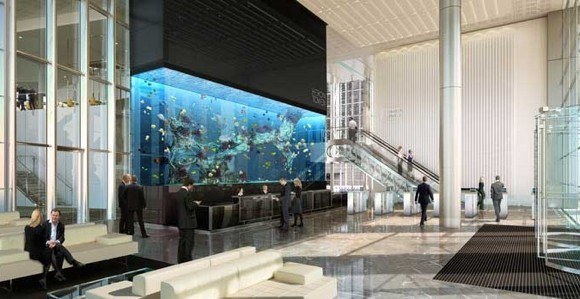 Thou shalt have a fishy...

This morning, workers at the Heron tower on Bishopsgate took delivery of the huge aquarium that will dominate the building's reception area and turn it into the ideal shooting location for the next Bond villain's headquarters.

Measuring 12m long, 2m deep and 4m high, the aquarium, reputedly the largest privately-owned one in Europe, will hold 70,000 litres of water and around 1,200 tropical fish, all of them imported from Heron Island, just off the Great Barrier Reef. To say that these non-native species would cause a mischief to Britain's amphibian population is an understatement, but 230mm acrylic walls should keep the beasties secure.