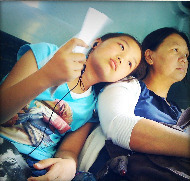 Image by stuart.noble from the Londonist Flickr pool
TfL are cutting £10m from their budget to cool tube trains this year. They say they want to ensure "value for money" so they'll be spending the bulk of their cash on fans in Victoria Line ventilation shafts. What isn't being said so far is what plans are being chucked out the (non opening) window: fewer air conditioned trains? No more very exciting giant fans?

A spokesman from Boris's office said de-sweating the tube is still a priority, then went on to display an amusing (to us, at least, but we're quite childish sometimes) and deep love for the word 'work', perhaps indicating a need to learn some wordsmithery from his boss: "if we can integrate improving the way the network works as well as cooling it, as part of the upgrade works, that is really being more efficient".

We're not sure what that actually means.

Bringing down temperatures on the tube has always seemed like one of those fantastic Tomorrow's World predictions of the future to us anyway - maybe we'll get chillier trains at the same time we get robot butlers and flying cars.