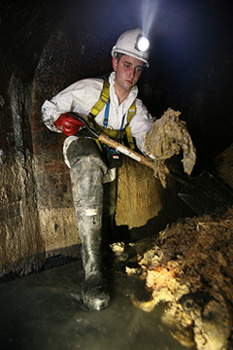 Here's your word of the day: fatberg. It refers not (as one may think) to a corpulent German, but to the chunks of fat that collect in the sewer networks after being poured down there by people who should know better.

If you've seen how cooking fat solidifies when it cools, you know how difficult it is to clean. Imagine that problem multiplied by thousands, and the scale of the muck that coats our sewer system becomes apparent. Thames Water began a major clean-up back in June, and have just reached Leicester Square. Last night a team led by chief flusher Danny Brackley (pictured), removed enough fat to fill nine double-decker buses, digging the stuff away from the walls using shovels, in what is believed to be the largest sewer-cleaning operation of its kind.Thames Water have launched a new campaign, Bin It Don't Block It, to highlight the scale of the problem. Don't be fooled into thinking that this is simply an issue for the poor wader-clad flushers. As Danny notes, around 7,000 homes and gardens in the Thames Valley get sewer-flooded every year, which is as horrible as it sounds, and it's usually down to people throwing things down the bog that they shouldn't.It could happen to you — and probably when your new beau is round for the first time, too. That beef stroganoff won't really be too appetising afterwards.See more pics from the clean-up on Flickr, and watch Danny at work in this video... probably best not viewed before or after a meal.