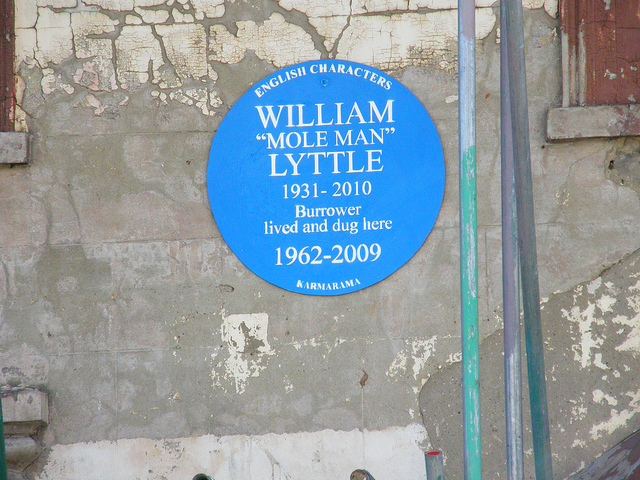 It has been just over a month since we reported the death of William Lyttle, the Mole Man of Hackney, and, ironically for a man most associated with digging big holes in the ground, the lack of any next of kin has so far delayed his funeral. “Taxpayers might have to shell out for the funeral of the oddball Hackney pensioner” grumbled the Hackney Gazette recently.

In lieu of a proper send off one neighbour has risked the crumbling walls of Lyttle’s wreaked house to put up a mock blue plaque (click the link for a close look) commemorating the Irish Mole Man as an “English Character”.

Dave Buonaguidi emailed Londonist to say “I lived over the road from him and I’m one of the residents that actually liked him, he was always pleasant and polite.” The plaque is “a light hearted tribute to an interesting eccentric.”

Dave is not the only person to remember Lyttle fondly. Streetwise Opera, a music programme for the homeless, remember Lyttle as “always a total gentleman - giving up his seat for other people in rehearsals and his cheerfulness and kindness will live long in the memory.”

This is not the man who appeared in the news stories following his death, most of which focused on Lyttle’s debts to Hackney council. It is also a contrast to the comments about him on Londonist's report of his death. He was clearly a divisive and difficult character who happened to do some strange and interesting exploration of subterranean Hackney. Perhaps Cardboard Citizens, another performing arts charity Lyttle was an active participant in, summed him up best as "sometimes not the easiest man in the world to be with, but a sparky and unusual man."

The plaque can be seen at Lyttle’s former home of 121 Mortimer Street. For the curious, the word Karmarama at the bottom of the plaque is the creative agency run by Dave Buonaguidi.

The Hackney Gazette, however, did not see fit to place its report on the plaque on its website. “A spokesman for English Heritage, which runs the Blue Plaque scheme, said the spoof plaque hadn’t infringed its intellectual property rights” it sniffed in it's print version.

Many thanks to lovely Hackney residents Lucy Kerr for transcribing the Gazette article and Al Robertson for the photo and making sure the plaque is still up there.