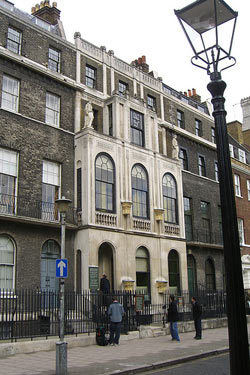 By mark.hogan
This month, we poke our noses into one of the better known of the lesser known London museums, the Sir John Soane's Museum.

You would have thought people had never seen a queue before, given the looks we got standing, amongst a couple of hundred other people, outside the Sir John Soane Museum. The candlelight opening consistently has people flocking, and then dutifully waiting, on the first Tuesday of every month. If the onlookers gawping at (and taking pictures) of the queue thought that was crazy, they should have joined it and waited the hour or so to get inside the place.

Straddling three buildings on Lincoln's Inn Fields, the architect responsible for the original Bank of England and whose tomb influenced red telephone boxes bequeathed the nation a house bursting to the seams with curios, antiques, art and architectural sketches of how he would have preferred London to look. There's even a skeleton in a closet, a Roman bust and a sarcophagus. The house is so bursting at the seams that some of the rooms have eschewed boring old walls in favour of secret panels, folding out to reveal the Victorian idea of lewd paintings and other gasp-worthy delights. One, a favourite, even opens to reveal an ornate, custom-made and stained-glass illuminated parlour Soane built for Padre Giovanni, a wholly fictional monk who has a factual grave in one of the two courtyards, right next to an enormous statue in memoriam of Fanny, Mrs. Soane's tiny lapdog.

Soane's eccentricity runs throughout the house. The secret alcoves, paintings hidden behind curtains and acoustic hotspots in the breakfast parlour are best revealed with a knowing wink by the excellent guides, who provide a full-on tour on Saturday mornings and stop you sitting on the chairs through the week.