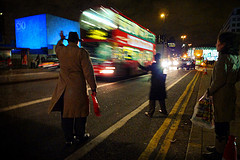 Photo / che-burashka
Last week two Muslim students accused a bus driver of refusing to let them board because of their Islamic dress. Metroline, the company which operates the bus, has investigated and are refuting the allegation; indeed, as they describe it, the incident had little to do with Islamophobia and more to do with a lack of basic manners on both sides.

CCTV tape from the bus appears to show the two women banging on the door as the bus comes to a stop at Russell Square, its final destination. The two women then entered through the back door and remonstrated with the driver, before disembarking and waiting outside. When the bus driver opened the front doors, the students had another exchange with the driver; it is at this point they were ordered off.

A Metroline spokesperson said that one of the women was being "argumentative". If this is the case, then the driver's decision was justified; if the vehicle is out of service, they are not supposed to allow passengers on board, and nobody should have to be yelled at for just doing their job. However, without any sound to go with the video, it's unclear whether the driver himself was also being verbally abusive.

Yasmin, one of the students, has said that she is "shocked" by Metroline's version of the story, and is seeking the advice of lawyers. That the students were so keen to speak to the BBC and accuse the driver of bigotry doesn't suggest that their motives were entirely honest, and the inflation of what appears to have been at best a minor disagreement into a story of racism and legal action is a sad affair.