Giant Goalposts To Be Built In Aldgate 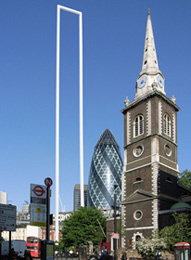 Okay, so they're not goalposts per se, but this is the winning design in a competition to create a new landmark for Aldgate.

Designed by Dutch firm DONIS Architects, the 'London Gate', as it is prosaically named, was probably the least complex entry on the five-strong shortlist, and is arguably the cheapest to build, which may have been a factor in its success.

Though the design may look simple, the Gate does have many applications: when sneaky teens aren't pinching sneakers, tying the laces together and throwing them up to hang from the top rung, the landmark is expected to be used for training the goal-shy England football team how to score. It also guarantees instant fame (and probably a police record) to the first person who's able to climb the thing.

The structure will be situated on a traffic island that lies on the site of what was once the 'Ale-Gate' which, despite its name, was not the route through which booze was brought in to London, but was in fact the only toll-free gate, open to all.

The Gate will be a key point on High Street 2012, the route running from the City to Stratford during the Olympics, and will be dismantled once the Games are over.