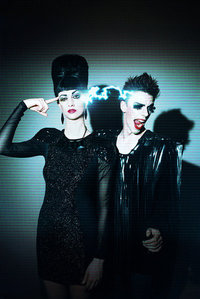 Bourgeois & Maurice
Bourgeois and Maurice's second full show, Shedding Skin, has arrived at the Soho Theatre just as many of their comedy compatriots head north for the Edinburgh Fringe. That, though, is fine with this particular duo as they have an altogether different destination: the fourth dimension. Having hankered for the chance to leave the standard three dimensions behind since childhood, this show takes us on a musical journey as they try to transcend the earthly plane.

This conceit aside, the show is a riot of song and visuals. Maurice Maurice, a tall brunette beauty with an updo that Amy Winehouse would give up every vice for, is all surly glances, occasional guttural grunts, a Tori Amos-like singing voice and musical fingers equally skilful on the piano and guitar. Her partner in cabaret, the glamourous Georgeois Bourgeois, is carried on stage by Maurice before he tears out of his first costume and into modern society through the strident number “C.H.A.O.S".

You want songs? There are great songs aplenty here. They have chucklesome lyrics and nifty melodies but, above all, the songs are fun with a capital FUN. You would need a cold, cold heart not to be swayed by and swaying to “Life” or "Take Me Away" while the chorus to “(I Will) Out-Outfit You”, a brash electro-pop duet, is still stuck in our heads and we’re considering charging rent.

Congratulations must go to their wardrobe designer. Costume change follows costume change, each costume more outrageous than the last. Aside from the outfits, both wear eye-watering amounts of black make-up giving them the appearance of being the Goth Carpenters.

The between-song antics which help the narrative along were a mixed bag. Maurice’s attempts to read the audience’s mind went down well while Georgeois’ attempts to seduce a member of the audience went down a little too well. On the other hand, some of the banter was so-so and the video clips added little to the show.

This, though, is nitpicking when we consider how much we enjoyed this show. This loveably bonkers Bonnie & Clyde stole our hearts and gave us back big fat smiles and a night to remember.

Bourgeois and Maurice can be seen at the Soho Theatre until July 10. Tickets can be bought here.