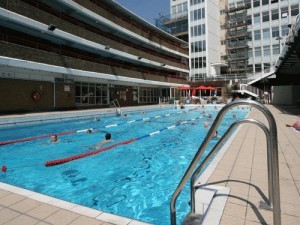 Audaciously situated at the junction between High Holborn and Shaftesbury Avenue, the Oasis is the most central and uncompromisingly urban of London's lidos - and on first approach the pool might seem to lie in an unusual, even unpromising location. Fear not: this potential weakness is actually the key to its success. To swim in the Oasis is to revel in the triumph that here, in the grimy and at times forbidding heart of London, a space has been carved out and claimed for humanity.

While some other lidos are known for the bold, clean lines of their art deco architecture, the Oasis uses the buildings around it to no less striking effect. The office blocks towering overhead seem even taller than usual to swimmers looking up, and their gleaming dark glass windows combine with the sweeping curve of the neighbouring block of flats to lend the pool a futuristic air. You may even have the fleeting sense of having stumbled into a JG Ballard- style metropolis - albeit one that exudes health and wellbeing rather than unravelling into a nightmarish dystopia.

Swimming has been taking place here for centuries, with Turkish Baths, fed by natural springs, installed in the 18th century and reputedly visited by Queen Anne. The modern outdoor pool has been a fixture since the early 1990s, having proved popular when the indoor pool was closed for repairs.

For many people, the central location and generous opening hours make the Oasis an ideal stop-off on the way to or from the office. Serious fitness swimmers predominate in the mornings, while leisurely evening swims are possible during the week up to 10pm (not least in winter, when steam rises from the water into the crisp air). Bikes can easily be chained to the railings outside, so why not combine a swim with a cycle ride for an uber-healthy commute? Failing that, you could try a more relaxed visit at the weekend, when the rooftop sun terrace and cafe overlooking the pool attract sizeable crowds.

A swim is priced at a reasonable £4.05. Cheaper deals are available for regular users, and for an extra fee squash courts, saunas, sun beds and a gym are also on hand. The outdoor pool is heated and opens all year round - but if the weather takes a turn for the worse, you can always head for the shelter of its indoor neighbour.

True to its ethos of embracing, rather than escaping, the city, this lido offers something for every type of Londoner. At 90 feet (27.4 metres), it may be a baby in comparison to such titans as Tooting Bec or London Fields, but its central location and unique atmosphere more than compensate. If you need convincing further, the palm trees at the poolside ensure that the Oasis truly lives up to its name.