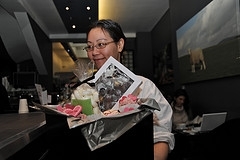 Looking at the personalities behind London's small businesses

Add Washington D.C., Cordon Bleu, Asia de Cuba, Nobu, Ottolenghi, sweets, savouries and Bloomsbury and who do you get? Why, Bea Vo owner of Bea's of Bloomsbury, of course!

How did Bea's of Bloomsbury come about?

"I never thought of myself as an entrepreneur. I opened the shop because I wanted somewhere nice where I wanted to work." She didn't even think twice about it when, in May 2007, she was offered, and immediately rejected, a position that would have had her on track to become the head pastry chef for Nobu London, where she had been working since 2006. "I told Regis [Cursan, the executive pastry chef for Nobu UK] I wanted to open my own shop, and Regis was extremely supportive." He encouraged Bea to go for it, despite her protestations that she was not ready and only expected to take such a step in five or ten years' time. By February 2008, Bea's of Bloomsbury was opened.

How did the business develop?

In May 2007, with a friend visiting from New York, Bea began looking for space. She found the current location, which she secured at the end of May after a short bidding war that resulted in a slightly more expensive lease than originally planned. Subsequently, Bea contacted friends and family to raise capital and was fortunate to secure a small business bank loan (right before the financial crisis) and an angel investor who was an old friend from university. She was also attending small business classes at City University and putting in time at Ottolenghi to learn all about the day-to-day operations of a shop because "as customers, we don't know what happens in the back of the house." The business has grown steadily and the second location will open in October at the glossy One New Change development in The City, near St. Paul's. Bea reinvests almost all the profits from the business, but she does currently draw a small salary.

How many people work for Bea's?

What is the best part of being part of Bea's?

"I was surprised how willing I was to work 100 hours a week for others, but doing 100 hours for myself is even better."

What is the most difficult part?

"Go for it. Have a full business plan and have an expert look at it. Get some mentorship. Offer to work for free at a similar business to understand all its peculiarities. If you are not willing to work for free for a few months, then why open a business? Because, initially, you will not be getting paid."