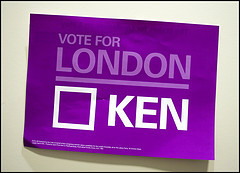 Photo / Simon-K
Following the official announcement of his tilt at the Labour mayoral candidacy, Ken Livingstone has begun the lengthy process of trying to win over one part of the electorate that never really jived with his public transport-loving ways: motorists.

The man often charged with promulgating a "war on drivers" during his two terms as Mayor has apparently noticed that car owners do indeed vote, and has proposed borrowing a scheme from San Francisco which would allow drivers to search for free parking spaces using their mobile phones. It's part of what Ken describes as London's transformation into a "smart city", utilising new and emerging technologies to make London a place that "provides efficient public services and empowers people to make informed decisions about the resources they consume". Whether it's a bright idea for people to be tapping on their mobile devices while driving is another matter.

The proposal comes on the day that Livingstone became the latest politician to bathe in Barack Obama's reflected glory, as he showed off his new campaign slogan: "Yes We Ken". Andrew Gilligan, no Ken lover himself (and a fine candidate for Mayor himself, according to Adam Bienkov), isn't terribly impressed:

A shortlist of Labour mayoral candidates will be drawn up on June 24th, with the winner announced in September. Beside Ken, the only candidate to have officially entered the race so far is former Bethnal Green & Bow MP Oona King.