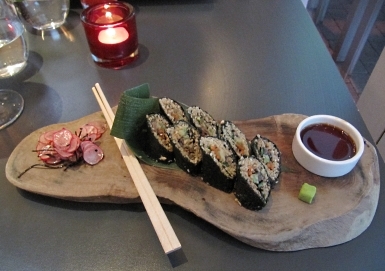 Maki with parsnip rice
Nudged into action by a growing trend for sustainable dining, Londonist has embarked on an eco eating crawl...

As far as vegan, raw food eateries go, Saf is pretty swish. Absolutely guilty of stereotyping, when we think of such places we think hippy and wholesome rather than slick. But slick Saf is and we love it for that reason. This is a place to convert a sceptical someone to the more eco way of eating, with gourmet grub and potent but oh-so-inventive (and organic, of course) cocktails. Service is attentive and staff smart, the menu is suitably poetic and food presentation impeccable.

We opted for a three course blow-out, which was actually quite tough. As vegetarians we don't normally have the run of the full menu and it took us an age to decide what to eat and drink. Our waitress was very helpful, able to describe in detail what each dish would entail should we pick it. She explained that raw doesn’t necessarily mean uncooked or cold, it just means that certain dishes on offer won’t have been cooked above 48 degrees C. She could also explain how nuts can be transformed into cheese and other such alchemy.

Our dining companion had a Japanese starter, beautiful rolls of maki with parsnip rice, while we had courgette cannelloni. Both were impressive, the flavours intense and crisp. They looked great on the plate too. For mains we tried a kind of lasagne with nut bolognaise and a baked tofu and rice cake. The lasagne was nice but not as exciting as the starters, while the stodgy tofu cake was tasty but became heavy going after a while. We rounded things off with an incredibly rich dark chocolate tart and some ice cream. Vegan ice cream just doesn't quite cut it I’m afraid.

Perhaps it sounds a little coarse but the real highlight was the booze, specifically a horseradish cocktail. It knocked the socks of us and made us determined to return to Saf, if not to eat then to drink, drink, drink. In the heart of Old Street madness, Saf is a calm place for food and drink adventures of the vegan kind. We think it might be rather good for a first date, the menu offers many a talking point and the cocktails will certainly kill off any nerves.