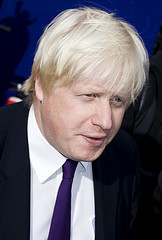 Photo / Simon-K
The Evening Standard reported yesterday that Boris Johnson has decided to run for Mayor again in 2012, potentially setting up a re-run of his battle with Ken Livingstone two years ago.

Antipodean campaign manager Lynton Crosby, who was behind the wheel of Boris' successful 2008 campaign battlebus, has been brought back into the fold to manage what Tory HQ are privately calling "Operation Re-elect Boris". Crosby was widely credited with the "doughnut" strategy that saw Boris nibble away happily on the capital's plentiful extremities, allowing Ken to devour the centre, a feast that ultimately proved less than a full meal for the Labour man.

Over at the Guardian, Dave Hill speculates that an official confirmation from camp Boris may come today, during the State of London debate, though it now seems he'll wait until everybody is happily wobbling about on his bike hire scheme before formally announcing his candidacy.

Ken vs. Boris, all over again; to wildly misquote Marx, if the first time was farcical, then the second will be tragic.