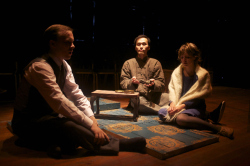 There’s no escaping the past in Limehouse. From the converted warehouses, to the dead pubs and the seamen’s missions, the neighbourhood still bows beneath the weight of its history. Fringe favourites Kandinsky have chosen the perfect venue, the crumbling Town Hall, to summon up the area’s ghosts.

Written and directed by James Yeatman, Limehouse Nights deconstructs the myth of London’s original Chinatown, represented as both exotic and repulsive in Thomas Burke’s 1916 shocker, Limehouse Nights. The play, featuring Burke himself, opens with a tour for the wealthy to gawp at ‘shifty’ Chinamen, which is soon contrasted with the reality of poverty, hard work and contemptuous racism. The plot is based on Britain’s first drug witch-hunt, the actress Billie Carleton’s cocaine overdose in 1918. Yeatman is interested in the impact of the scandal on its convenient Chinatown scapegoats.

The set makes atmospheric use of lanterns, sacks and shipping crates, one of which opens like a jewel-box to reveal a mini-opium den. The action revolves around the conflicted Inspector Burke (Tom Ferguson) whose fascination with Chinatown earns him the distrust of his superiors, and brings trouble to the people he clumsily attempts to befriend. The best scenes are gripping: Lee Chee Kong (William Mychael Lee) and his Irish wife Mita (Kerry-Jayne Wilson) as the patsies, two outsiders courting tenderly, united in their distrust of the English ‘bastards’. Ed Hancock, a moustachioed David Mitchell, puts in an enjoyably sardonic turn as Burke’s boss, asking “How can they be innocent? They’re Chinese.”

Although the evening never drags, some scenes would benefit from a sharper edit to avoid overworking the main themes. But this is an entertaining evening; ambitious, intriguing and Limehouse to the core.