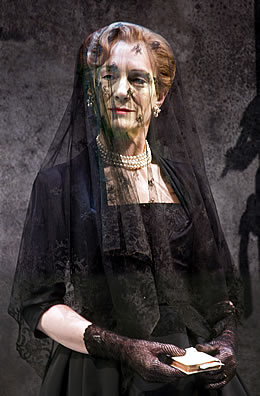 Harriet Walter as Livia, a woman to beware of... Photo by Simon Annand
You certainly get a lot for your money in Women Beware Women, the National Theatre's latest production of Thomas Middleton's tragedy of lust and power play.

Women Beware Women is the opening play in the National Theatre's Travelex £10 Season. For your tenner you get cool jazz from a live band, cocktails and cigarettes, incredible chandeliers, incriminating chess games, and some classic Jacobean comedy. Plus, this being Middleton, a nasty dose of rape, incest and murder...

This is a sumptuous show on a grand only-at-the-National scale, with an incredible set, that sexy live band, some wonderful costumes and lots of action: Marianne Elliott's production certainly uses the space and the revolving stage in the Olivier to excellent effect.

Middleton's story, as this excellent Guardian piece sets out, is like a sequel to Romeo and Juliet, where the two lovers live, elope, and struggle to make sense of their perhaps too-hasty marriage in a dangerous, morality-free Florence.

Sixteen year old Bianca (Lauren O'Neil) has secretly married the poor-but-happy young clerk Leantio (played by History Boy Samuel Barnett). He tries to keep his trophy wife locked away, but her beauty is spotted by the Duke, kind of guy who won't take no for an answer. Particularly once the evil, twice-widowed Livia gets involved.

Bianca's story plays out against that of the sassy Isabella (Vanessa Kirby, in gorgeous dresses), a clever young lass with a father intent on marrying her off to an idiot. The widow Livia won't keep her nose out here either, lying to Isabella (her niece) about her parentage, so she commits incest with her uncle, played by the excellent Raymond Coulthard. Women beware women, indeed.

Occasionally Elliott's production is guilty of style over substance: the entrance of The Duke in a shower of gold glitter looks incredible, but we're puzzled as to why it's necessary. But when the play reaches its dizzying climax: a druggy, multiple-murder at a masque, played out in mime to the haunting sounds of the band and the endless turning of the revolving stage, it's a pretty breath-taking piece of theatre.

Add to that some stand-out performances in an incredibly strong ensemble (Harriet Walter is both perfectly horrid and convincing in love as Livia; Harry Melling - Dudley Dursley to you and me - as the idiot Ward is genuinely funny) and you've got the ingredients for an entertaining evening.

As a play, Women Beware Women, with its complete dearth of sympathetic characters, may have left us a little cold. But you certainly can't fault the value-for-money aspect of the National's extravagant production.

Women Beware Women is booking at the National Theatre until 4 Jul. Tickets from £10, but if you're aged 16-25 you could get in for nowt. Visit www.nationaltheatre.org.uk for more info.