The London Dossier: Chapter 10 – The Underworld

By Londonist Last edited 148 months ago
Londonist The London Dossier: Chapter 10 – The Underworld 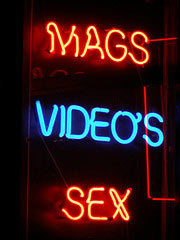 By beatdrifter via the Londonist Flickrpool
If previous chapters have suggested that the London Dossier was quite unlike other guides to the capital, Chapter 10 is where they really part company. Because here is where crime reporter and author Eric Clark is allowed to explore the side of London that most books would have glossed over or, more likely, ignored altogether.

He’s already champing at the bit. But first, as is customary, Len Deighton provides an introduction to London’s Underworld with a look at Soho, the place where anything goes but ‘just make sure it’s not your wallet’.

We never knew this: ‘There are patches of Soho pavement that have a social significance - the corner of Old Compton Street and Frith Street being one such patch - where you might see groups of men standing there reading papers, smoking and what the police call loitering’.

It’s not what you think. In fact these stretches of pavement were unofficial labour exchanges. Men seeking employment would denote their trade by where they stood. The corner of Frith and Compton was for waiters and the adjacent corner was for catering workers. Employers needing staff would conduct a cursory interview then hire them on the spot. A similar thing went on in nearby Archer Street on Monday nights, but that was for musicians. You clearly had to know where to stand or else you’d end up washing the dishes when you wanted to play the washboard.

‘Most of them are dirty little basements where the walls are peeling at a faster rate than the dollies,’ he writes. ‘The décor is likely to be a forty-watt orange bulb and some slightly broken kitchen chairs.’ (Tsk. There’s never a chair-mender around when you want one.) ‘The girls will be mostly either young teenagers who have run away from a home in the Midlands or rather tough ladies.’

Len is also suspiciously knowledgeable about Soho’s prostitutes. ‘Most of their clients seek flagellation,’ he confides, ‘what the underworld calls fladge’. As for getting beaten without the added frisson of paying for the privilege, Len is reassuring. ‘(In Soho) your person will be safe. Very few operators in Soho would resort to violence because this would be bad for business.’

Yes, but what about the late-night drunks, Len? Friday night? Everyone pissed up? All those mods & rockers? You took your life in your hands, surely? Len concedes there are risks. ‘Some ten minutes after the pubs close there is the slim possibility that you will see a couple of drunks trying to fight and stay upright and probably managing to do neither.’ It was a jungle out there.

Another sight the keen observer might have witnessed in 1960’s Soho was well-dressed blokes emerging from expensive cars and prodding at the garbage outside restaurants. What was all that about? Len says they would have been restaurant proprietors. By poking around a rival’s garbage, they could tell things like the proportions of food sold, whether it was frozen, fresh or tinned, which suppliers the restaurant was dealing with and a whole lot more.

We saw someone doing this the other day. It looked like a tramp but now we’re thinking it might have been Jamie.

So, on to Eric Clark and his take on London’s Underworld.

Eric’s clearly a little bit in love. ‘Today London can boast the best and biggest pornography, some of the fastest-grabbing clip-joints on the European scene, and as vicious (and prosperous) gangland bosses as can be found anywhere outside of Mickey Spillane.’

Two of these bosses would have been the Krays, of course, still over a year away from their convictions for murder. It is a testament to their legendary viciousness that Clark only refers to them obliquely.

He echoes Deighton’s opinion that visitors to London were safe. ‘It is, as any gangster would tell you, a cause of lasting regret when a stray bullet hits a visitor.’ Any banged-up gangster, particularly.

Eric then launches into a step-by-sordid-step guide on how to get hold of hardcore pornography from the ‘dirt-bookshops’, including this piece of advice on how to avoid being mistaken for a plain-clothes policeman: ‘Try wearing spectacles’.

Text-only formats sorry, unillustrated books (‘The Sexual Life of Robinson Crusoe, anyone?) would set you back £3 - £5. For a set of five photographs, don’t pay more than £1.

That’s all very well, but where do we go for actual sex with a lady? In Soho, just look for the signs that say things like ‘Model, upstairs on right’ or ‘Governess teaches French. Strict Disciplinarian’. It’s all a bit Carry On, isn’t it? Outside Soho, the Baywater/Notting Hill area ‘has an average of 40-50 girls working on an average weekday evening’, while Bedford Hill in Balham is an area where business has been enjoying, ahem, ‘continuous growth’.

Exercise caution, though, cautions Eric. ‘Tracy, operating around Meard Street, is an attractive blonde - until he removes his wig’. Jeez, you pay all that money and it was a brunette all along!

Not quite. According to a government report published two years earlier (in the head-fuckingly titled Second Brain Report), there were 753 known drug addicts in the UK. (Today, of course, that would be roughly the number of well-known drug addicts.) But the figure was growing rapidly. ‘One addict already claims to know nineteen places where he can get narcotics in London.’

Presumably that included Boots. ‘Until doctors are prevented from prescribing narcotics to addicts, Boots in Piccadilly Circus will be worth a visit at midnight, the hour when addicts can obtain their next day’s dose.’

In Chapter 11, Len Deighton investigates 24-hour London (he struggles a bit after the first paragraph), while Frank Norman gives us a butcher’s at London slang. Get all the brass tacks next week.