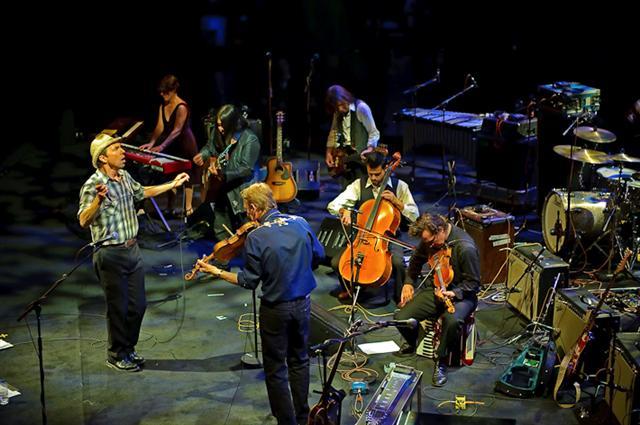 Image courtesy of the Barbican

In 1984 a group of Australian musicians came to London to try their luck. By January 1985 they were on the cover of NME, which predicted it would be the "Year of The Triffids." During their stint in the UK, the band recorded ‘Born Sandy Devotional’ in London which is widely regarded as their best work and rated among the best albums to come out of Australia (the site of the recording is commemorated by a plaque in Britton Street). Critical success and festival spots followed, but by the 90's the band was no more. Some members moved on to other musical projects, while others took up 'real jobs'. Singer-songwriter David McComb continued to perform with other groups and pursued a solo career, then sadly passed away in 1999.

Since 2008 the remaining members have been occasionally performing 'A Secret in the Shape of a Song' - a celebration of The Triffids’ and McCombs’ music - at various arts festivals in Australia. The group is returning to London, where they first found success, for one performance, joined by special guests including Mick Harvey and Warren Ellis of The Bad Seeds (these words from Nick Cave on an afternoon spent with McComb are worth a read). This one-off performance offers music fans a rare chance to enjoy the Triffids' music live, and will no doubt render a few nostalgic and homesick Australians a little teary-eyed.

The Triffids perform at the Barbican on Friday 9th April, along with The Black Eyed Susans and other special guests. Tickets from £15 - call 020 7638 8891