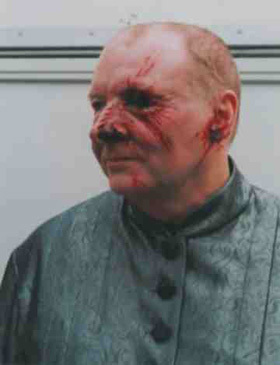 All is not what it seems at The Invisible Dot's Swiss Spaghetti Harvest Festival, as they celebrate - appropriate to the season - the many ways the public has been duped by the media into believing a load of old bunkum.

The third film to be shown in the series (you've already missed Zelig and Bob Roberts) will be Ghostwatch on 11th May, the BBC's 1992 mockumentary which can make anyone old enough to remember it still feel shivers down their spine at the merest caterwaul or glimpse of a shadowy figure behind the curtains. Whilst the Americans were having Nightmares on Elm Street*, this brought such horrors literally to our doorstep (if you live in Northolt) as we were duped by familiar faces - such as Sarah Greene, Craig Charles and even truthsome stalwart Parky - into believing that London's 'burbs were held in the grips of a poltergeist adopting the form of Norma Bates.

In a climate where film makers seem to be turning to technology more and more to help them create alternate realities, this shows how even humble Aunty Beeb managed to create something much more convincing and memorable without the need for fancy specs or double figure ticket prices, simply by reusing aspects of our lives with which are most familiar and comfortable.

The screening will be followed by a Q & A with the writer Stephen Volk and director Lesley Manning, the fiendsters behind the creation. Cats optional.

As a heads up, the final instalment for the festival will be Werner Herzog's Little Dieter Needs To Fly on 25th May, which calls in to question the role of the film maker and the objective nature of truth in the creation of real-life documentaries, this time of Vietnam veteran Dieter Dengler. But moreover it's a beautifully shot and entertaining account of this astonishing man's astonishing story.

*Londonist would like to acknowledge that this is not a contemporary film - do you realise what dross was being churned out at that time though? Omen IV, Texas Chainsaw Massacre III, Psycho IV, Critters, Tremors, Leprechaun, and Invasion of the Bunny Snatchers, FFS... Okay, we'll give you Candyman though. Maybe.