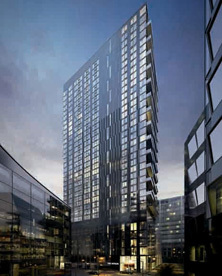 The "first major residential development in the Square Mile for 30 years" (according to the developer, Heron International) is now under construction on the site of Milton Court, reports Building Design.

In a move sure to cause confusion, the nepotistically-inclined developer has decided to name the 36-storey tower after itself, meaning that the City will get a second Heron tower in addition to the Bishopsgate skyscraper. At 112m tall, the demi-Heron's moody-looking anodised aluminium and steel facade should provide an interesting aesthetic contrast to the Barbican's concrete towers on the other side of Silk Street.With just 284 apartments, the building, designed by David Walker and RHWL Architects, will do little to address the scarcity of housing within the City's limits, where 350,000 people work yet just 8,000 live. Should you have the cash, apartments go on sale this month, though you won't be able to enjoy "effortless living in the heart of the City", as the flash (and Flashy) website promises, until 2013 at the earliest.