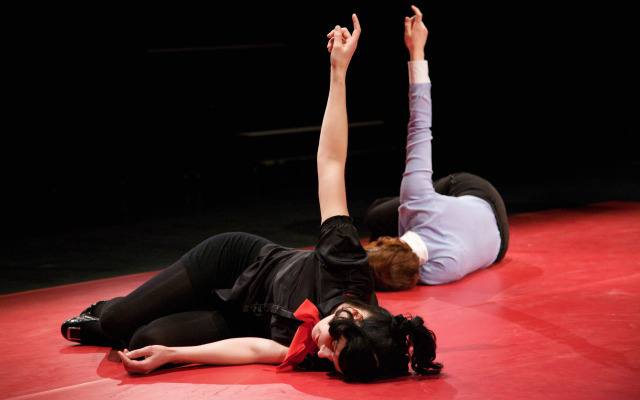 Like secretly favouring one child over your others, it's unfair to single out one play in a trilogy as the most enjoyable, uplifting and clearly structured. But we're going to do that about The Festival, the third, most recent part of Lone Twin Theatre's Catastrophe Trilogy, because sometimes it's impossible to deny that one part gets it just right while the others struggle with what they're doing and saying.

As independent pieces, Alice Bell (premièred 2006) and Daniel Hit By A Train (premièred 2008) are easy to appreciate. Alice Bell recalls Caryl Churchill's Far Away we see a violent, war torn world through young, innocent, optimistic Alice and a filter of upbeat, whimsical songs sung by the cast of five plucking jaunty tunes on ukuleles. Initially bewildering and amusing, it becomes clear that Alice Bell is a sing-a-long-a-war-affected-childhood, all the more devastating because her harsh story is told in twinkly comic song rather than softened by the jokes and tiny guitars. The point when you realise you shouldn't be laughing and yet you feel like you must is when Lone Twin Theatre has got you, as they have intended to all along in Alice Bell.

Daniel Hit By A Train is more brazenly whimsical with sudden bursts of vaudeville, slapstick, direct address to audience and more ukuleles. It races through the 53 memorial plaques in Postman's Park, presenting each heroic story rather quickly and sometimes flippantly. The way song, dance and storytelling in Alice Bell has developed into this one is easy to spot. However, Daniel Hit By A Train even without comparing to the rest of the trilogy was a tricky piece to watch; how should we respond to comic presentations of what we know to be tragic stories? Every tale ends in a death - it doesn't feel right to smile at cast member Molly Haslund miming burning to. We tittered uncomfortably at Guy Dartnell's repeated botched attempts to save a drowning boy. Lone Twin Theatre's attempts to utilise the same startling juxtaposition of form and subject as in Alice Bell but without the same rewarding effects. We appreciated the challenge of interpreting the Postman's Park heroes differently rather than just "a bit sad". But without clearer signals as to how else to comprehend them, we were left feeling just "a bit baffled."

And then there is The Festival.

Seeing it at as the final piece of the trilogy puts the formal experiments of the previous two into perspective; The Festival feels like the end of a journey and is fittingly celebratory. A woman meets a man at a festival, they promise to meet a year later at the same festival but that one encounter triggers a subtle but deeply significant change in the woman and by the time they meet again, her wants, needs and dreams have completely changed. The cataclysms are nothing dramatic or deeply profound; it's simply being at a festival, in a big crowd, enjoying unexpected appearances by U2, The Red Hot Chilli Peppers and Bruce Springsteen that takes her out of herself momentarily and she is able to then reassess her life with greater clarity.

The audience was clearly moved when the cast gamely recreated U2's Where the Streets Have No Name - it's a wonder that lighters weren't held aloft and no one tried to stage dive as the good feeling the company managed to produce was so exactly like being at a gig when the band play the song everyone has been waiting to hear. The songs in The Festival, the performance style, and the warmth of the piece makes it more coherent, cohesive, accessible - whether you are seeing it as part of the trilogy or on its own. It's just lovely, like having all your best karaoke / festival / gig / party moments re-enacted for you and seeing how those moments can change you, may have changed you.

The Catastrophe Trilogy is a rewarding experience seen as one piece, quite challenging but charming too; seen separately there's less chance to see how the company has developed ideas from one piece to the next but more opportunity to appreciate the stories in themselves. However you see them, go see them: catastrophes have never been more uplifting.