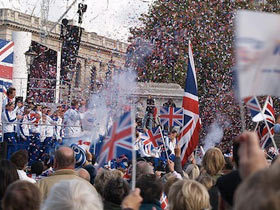 This morning various current sporting celebs congregated at Trafalgar Square together with some 1948 Olympians (from the last time London hosted the Olympic Games). They were there to invite sports fans from across London and around the UK to 'sign up' for ticketing information for the 2012 Games.

You can sign up at www.tickets.london2012.com to tell the London 2012 Organising Committee which sports you want to see. You'll be updated on major sports events, 'test events' before 2012 and be among the first to find out when tickets go on sale in Spring 2011 and how to apply for them.

There were some other aspects to this announcement - the number of tickets is now higher than expected, at a total of 10m over both the Olympics and Paralympics; and 75% of these will be allocated in a public ballot.

While you can also sign up by calling a number - 0844 847 2012 - we expect that as you're reading this on the interweb you'll probably register on it too. Now all we need to do is win some medals.